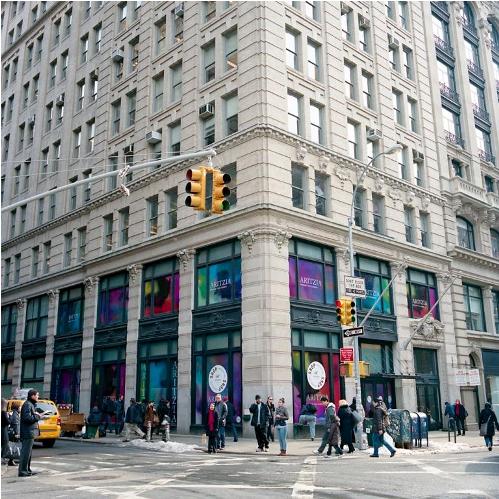 The commercial building at 524 Broadway in the heart of SoHo was completed back in 1902, boasting a design by Arthur H. Bowditch. The retail and loft office building is currently owned by Tahl Propp Equities, and is home to various high-profile tenants, including flexible space provider WeWork. The building benefits from an excellent location near all the offerings of the SoHo Cast Iron District, making it an appealing destination for commercial tenants.

524 Broadway offers open, flexible, loft-style commercial space fit for tenants in a wide range of industries, from tech and law to fashion and architecture. The property is also known as 68-72 Crosby Street, 80-88 Spring Street and 524-528 Broadway.

Getting to and from 524 Broadway

The office building at 524 Broadway is convenient to several bus lines, including express service, as well as the N, R, 4, and 6 trains. It is located just one block away from the Prince Street subway station serving the N, Q, and R lines, and nearby the Spring Street station and the Broadway-Lafayette Station.

Who is renting office space at 524 Broadway?

The 524 Broadway property is home to several tenants in the fashion, media, and real estate industries, including The Corcoran Group, Marc Jacobs, Arch Real Estate Holdings, INVNT, and Vibrant Media. The building used to house a Gap store for many years, however that space is now occupied by Aritzia. The property is conveniently located in the heart of SoHo, so numerous dining and shopping options are easily accessible. The building also houses the Balthazar Restaurant on its ground floor.

How much is the rent price for office space at 524 Broadway?

Office asking rents in Midtown South hover around $78 per square foot, slightly more affordable than Midtown Manhattan submarkets like Hudson Yards or the Plaza District. However, high demand for loft-style office space located in hip areas has pushed office asking rents in SoHo to a post-recession high of $92 per square foot, according to data from Colliers. Companies working in fields like fashion, media, advertising, architecture or tech are drawn to the flexible, open, airy loft spaces found in SoHo and the Garment District. Even so, affordable lofts in SoHo are still available and can accommodate small- to mid-size businesses.