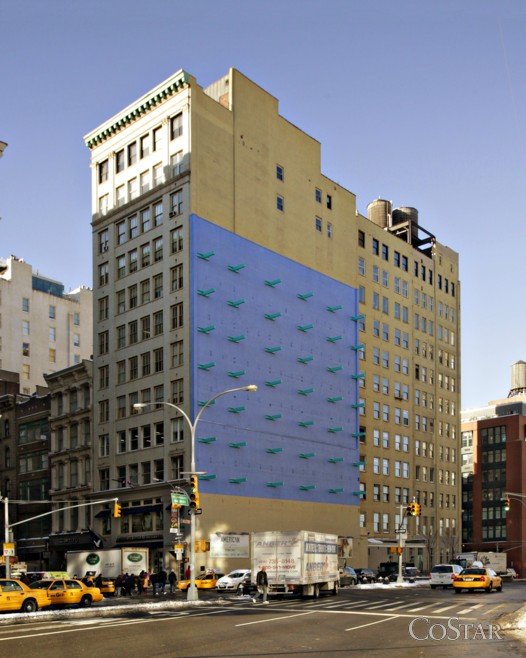 The office building located at 599 Broadway in Midtown South was originally built in 1917 and renovated in the 1980s, and is known as the Soho International Arts Center. Nestled between Prince Street and Houston Street, along a busy pedestrian thoroughfare with many retail shops and dining venues, the Soho office building is highly appealing to creative office tenants in industries like media, publishing, fashion and coworking.

The Soho International Arts Center offers 120,000 square feet of Class B Soho office space, across 12 stories. The condominium office building is owned and managed by ABC Realty and includes more than 30,000 square feet of retail space. Office spaces are column-free throughout the building, and feature high ceilings and large windows offering exquisite views of the Soho submarket. Amenities at 599 Broadway include an attended lobby, plenty of natural light and city views on all four sides, as well as easy access to public transportation.

Getting to and from 599 Broadway

The office building at 599 Broadway is convenient to many public transportation options, including the 4, 5, 6, B, D, Q, N, and R lines, via nearby subway stations at Broadway-Lafayette Street, Prince Street, Bleecker Street, Spring Street, and Lower East Side-Second Avenue. The Soho International Arts Center is also located in close proximity to a plethora of shopping and dining destinations in Soho/Noho.

Who is renting office space at 599 Broadway?

How much is the rent price for office space at 599 Broadway?

Office asking rents in Midtown South tend to come at a premium, and can go well above $80 per square foot, or even higher, for Class A assets. Class B properties like 599 Broadway tend to be more affordable than their Class A counterparts, but they still offer all the modern amenities that creative office tenants look for nowadays. Office rents at 599 Broadway tend to start somewhere around $75 per square foot, but can go higher, depending on the terms of the lease.