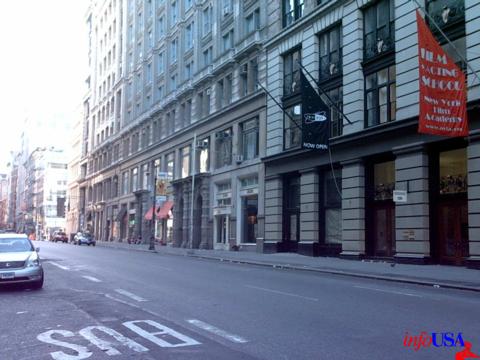 The Soho neighborhood of Midtown South is a popular location for creative businesses, such as architecture firms, graphic design agencies, art galleries and fashion designer labels. The area is populated with restaurants and retail stores, drawing a steady stream of foot traffic. One property in this bustling neighborhood is located at 580 Broadway and offers nearly 130,000 square feet of loft-style office space for rent. The building is located prominently between Houston and Prince streets, and is home to various office tenants in different creative industries.

The 12-story building rising at 580 Broadway in Midtown South offers 127,597 square feet of Class B Soho office space. It was built back in 1900 and is currently owned and managed by Broad Prince Realty. Amenities include an attended lobby, storefront signage options, and separate doorways for each of the retail units on the ground floor. The building also benefits from a strategic location in the heart of Soho, offering access to all the dining and shopping offerings nearby.

Getting to and from 580 Broadway

The office building at 580 Broadway is conveniently located in the bustling Midtown South submarket of Manhattan, close to a plethora of dining and shopping destinations. Those working in the building have easy access to the Broadway-Lafayette, Bleecker Street and Prince Street subway stations, which serve the B, D, F, M, N, R, and 6 trains. Express bus service is also available along Broadway.

Who is renting office space at 580 Broadway?

How much is the rent price for office space at 580 Broadway?

Office asking rents at 580 Broadway tend to come at a premium, given the building’s excellent Midtown locations, modern amenities and connection to public transport. Consequently, office rents tend to be on a par with the average commanded in Midtown South, an average which hovers around $85 per square foot, or even higher.