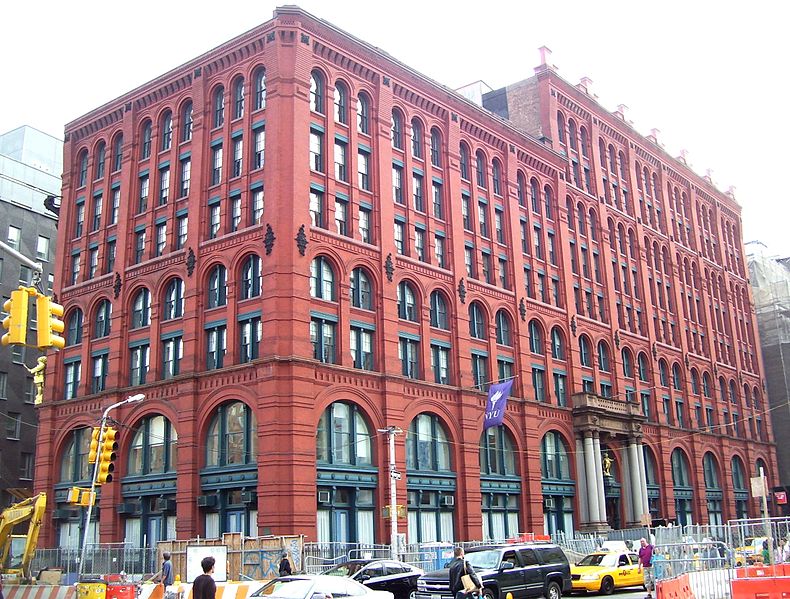 The historic building at 295 Lafayette Street in Lower Manhattan was originally built in 1186. It occupies a full city block in Nolita, bounded by Lafayette, Houston, Mulberry and Jersey streets, and is owned by Kushner Properties. The building was designed by Albert Wagner in the Romanesque Revival architectural style, and was built to serve as the printing facility of the J. Ottmann Litographic Company. It was expanded in 1892 and served as the longtime home of Puck Magazine, up until 1918. After that, 295 Lafayette housed several printing presses, and now provides office space for architectural firms and digital media companies. In the early 2010s, Kushner added six penthouse apartments on the top floors of the building.

The Puck Building housed numerous independent printing firms over the decades. In 2011, the building underwent a major renovation and repositioning effort, and its first seven floors were reimagined as Class A creative office and retail space. Each floor features loft-style, open office space with large windows that allow plenty of natural light. Amenities include 24/7 building access and security, a concierge-attended lobby, and tenant-controlled heating and cooling systems. The building also incorporates two expansive event spaces, The Skylight Ballroom and the Grand Ballroom. REI also opened a 35,000-square-foot store spanning the first three levels of the building in 2011.

Getting to and from the Puck Building

The Puck Building is conveniently located in the buzzing Nolita neighborhood of Lower Manhattan, close to numerous shopping and dining destinations in SoHo and NoHo. The building is located within walking distance of the Bleecker Street-Lafayette Street, Broadway-Lafayette Street and Prince Street subway stations. Those working in the building consequently have access to various public transport lines, including the 4, 6, B, D, F, M, N, Q, R, and W trains.

Who is renting office space at the Puck Building?

The Puck Building used to be a popular location for printing presses and publishing firms. Nowadays, it is home to several media and architecture firms, among others. Notable office-using tenants include NYU’s Robert F. Wagner Graduate School of Public Service, Cadre, Oscar, Axiom, and Thrive Capital. Retail tenants include REI and Chef’s Club.

How much is the rent price for office space at the Puck Building?

Office rents at the Puck Building are roughly on par with the Downtown Manhattan average of $62 per square foot. The building’s historic status and convenient location close to public transportation, shopping and dining options, appeal to office-using tenants in creative industries like media, communications or architecture.