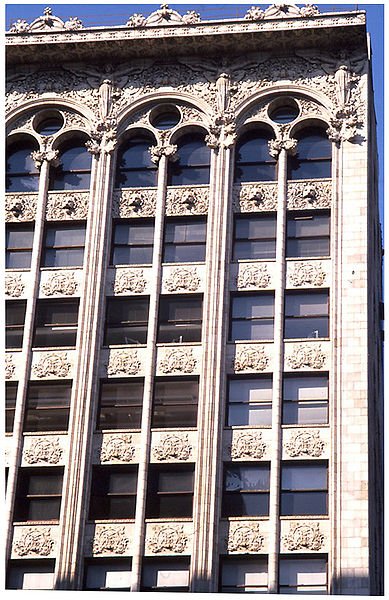 The office building located at 65 Bleecker Street in Midtown South was completed in 1899, boasting a design by Louis Sullivan, the father of the Chicago School of architecture. The property, known as the Bayard-Condict Building, was the architect’s only work in the city, and today, it is a New York City landmark and a National Historic Landmark. The building was one of the first steel-frame towers constructed in NYC, yet the exterior is clad in masonry and white terra cotta.

The Bayard-Condict Building offers tenants 120,000 square feet of Class C Soho/Noho office space across 13 stories, and is owned by Shulsky Properties. The Greenwich Village property was originally constructed in 1899, and includes roughly 8,000 square feet of retail, as well as showroom space. In 2000, the 13-story building was renovated by WASA/Studio A architects and engineers, and nowadays it houses various high-profile office tenants, as well as a restaurant.

Getting to and from 65 Bleecker Street

The Bayard-Condict Building benefits from an excellent location in the heart of Midtown South, in the Noho Historic District. Those working within the building have access to all the offerings in Greenwich Village, just steps away from New York University, as well as retail and dining destinations. Major bus and subway lines transiting the Soho neighborhood are only blocks away from the building at 65 Bleecker Street.

Who is renting office space at 65 Bleecker Street?

How much is the rent price for office space at 65 Bleecker Street?

Office asking rents in Midtown South tend to hover around $84 per square foot, and can go even higher for Class A assets. Class C office properties like the Bayard-Condict Building tend to be significantly more affordable than their Class A or even Class B counterparts. This makes them ideal for startups or smaller businesses looking for cheaper options in a good location.