Commercial real estate markets experience boom and bust cycles and confront an always-changing world. Businesses always prioritize cutting costs and increasing profits; innovation trends and cutting-edge technologies drive these objectives. Recently, there has been considerable press coverage around ChatGPT, the most potent, human-like A.I.-powered communications tool ever. Could a platform this powerful change the face of New York City? Will ChatGPT and A.I. shake up commercial real estate and affect space, vacancy rates, and pricing?

Then, after the Financial Crisis, when New York City commercial real estate froze, and Midtown’s Class A office vacancy rate rose above 12%, the market again saw an evolution. Soon there was mounting hype behind “mobile apps.” Whispers of entirely new industries emerging from the technological prowess of mobile phones soon grew louder.

Just as offices took over warehouses and lofts, tech tenants linked to mobile apps absorbed many vacancies brought on by the Financial Crisis.

What About the Impact of Artificial Intelligence (A.I.)?

Over the last few years, A.I. has become the latest hyped-up trend. But until this point, it has yet to make a meaningful impact.

A.I. was also supposed to impact business communications. While we have seen some A.I. tools like Grammarly and various chatbots streamline communications tasks, they also have yet to make a tangible impact.

ChatGPT could change all that and commercial real estate as well.

ChatGPT is an extensive language model trained by OpenAI. Its purpose is to generate human-like text based on the input it receives. The tool has a variety of potential uses for natural language processing tasks, such as text generation, conversation simulation, and language translation.

Cool enough, isn’t it? But we didn’t entirely write that description. ChatGPT wrote the basics after we asked the tool, “what is ChatGPT?” We did little more than polish up some grammar in the platform’s response.

ChatGPT is the most powerful and human-like A.I. communications tool to date. It works like a chatbot but interacts with people and follows detailed instructions. Its capabilities are spectacular and game-changing.

Google allegedly had the technology behind ChatGPT for years. But they purposefully didn’t release it to the public because of how it could cannibalize their advertising sales and revenue model. When you input text in ChatGPT, it functions almost like a search engine on steroids, gives you a detailed answer immediately, and bypasses any need for a search engine.

You get immediate results on a screen and do not have to sift through 7 or 8 pages.

The impact of ChatGPT could have a similar ripple effect and significantly impact commercial real estate in two ways.

In one scenario, it could cause specific industries to reduce their headcount and require less office space.

In the other scenario, it could give rise to new industries, businesses, products, services, and applications requiring a larger headcount and more office space.

It is almost eerie how intelligent and capable ChatGPT is. The app’s efficiencies could inevitably reduce the required headcount for marketing agencies, PR firms, and computer programming companies.

First, ChatGPT can help write and check code. However, not only can it provide code examples and snippets for specific programming tasks. It can also explain programming concepts, techniques, and suggestions for debugging and troubleshooting.

Furthermore, it can help automate the production of texts like marketing materials. You tell ChatGPT what you want to do and then explain how you want the bot to customize it.

Moreover, resistance to returning to in-office work could result in higher vacancy rates. ChatGPT can increase the efficiency of remote work and communication if businesses use ChatGPT to automate repetitive tasks and improve virtual collaboration.

There’s also a case for ChatGPT’s impact on commercial real estate resulting in demand for more office space. Especially if ChatGPT’s capabilities grow, evolve, and improve and give rise to a wave of new companies that revolve around the platform.

With new industries, businesses, and applications come large headcounts and significant demand for office space. Look at what happened with the mobile app wave over a decade ago.

For instance, say a company uses ChatGPT and A.I. to automate customer service or sales tasks. That company could theoretically need to hire more employees to manage the technology.

Furthermore, suppose a company decides to use ChatGPT and A.I. to develop new products or services. New products and services could result in the company needing to expand its office space to accommodate additional team members.

The Key Takeaway on ChatGPT and A.I.

These are just a few examples of the impact ChatGPT and A.I. could have on commercial real estate. As its technology evolves and advances, we could undeniably see a tangible impact on markets like New York City.

Remember- we are still in the early days. Much of ChatGPT’s impact on commercial real estate and office space will take years to see and depend on the technology’s usage. 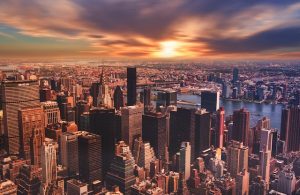 Nobody has a crystal ball for emerging technologies. Sometimes they can change the face of entire real estate markets. Other times, they prove to be nothing but hype. However, the early takeaways are that the human race has never seen an A.I. tool as powerful as ChatGPT before.

So, can ChatGPT and A.I. change commercial real estate?

Perhaps a better question is if it can change our world as we know it.

There’s a reason why Microsoft is in talks to acquire 49% of OpenAI, the developer of ChatGPT, at a $29 billion valuation. Interestingly, they want to invest all this money in a powerful A.I. platform after laying off 10,000 workers.

What message do you feel that sends?