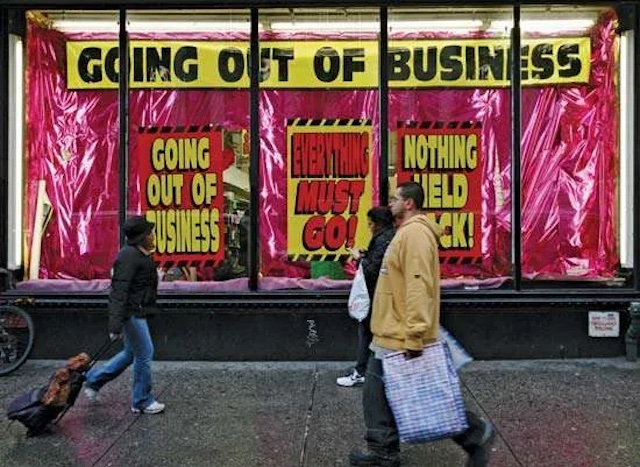 No matter how anyone tries to spin it, we are already in a recession. The U.S. GDP shrunk in Q2 by -0.9%, marking the second consecutive quarter it contracted. That isn’t just an “indication” of a potential recession- it’s the technical definition of one. Inflation remains out of control, rising another 8.3% in August 2022. The New York City commercial real estate market will not be immune to any of this.

While the National Bureau of Economic Research (NBER) hasn’t “officially” declared a recession yet and considers measures such as personal income and unemployment, let’s stop lying to ourselves. It’s here and will worsen as the Fed keeps raising rates.

After all, the Fed just hiked rates another 75 basis points for the third consecutive time.

The New York City commercial real estate market, especially concerning Manhattan office space, has had an uneven recovery since COVID. A recession could have numerous impacts, both on a macro level and micro level.

The first thing to consider is surging shelter costs and their impact. Then it’s crucial to see how history could repeat itself by finding parallels between 2022 and the previous two recessions in 2008 and 2020.

Particular stakeholders desperate for election wins in about seven weeks want to spin the current inflationary landscape as cooling. On the surface, they’re right. The 8.3% inflation rate in August 2022 eased for a second straight month and marked the lowest CPI reading in 4 months. 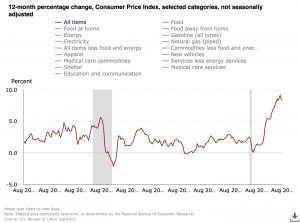 But no, it’s not easing and remains out of control.

Forget that inflation came in higher than market forecasts of 8.1%. You have to look at core inflation. Core inflation, which excludes food and energy costs, rose 6.3% in August. This figure is considerably hotter than July’s 5.9% increase. 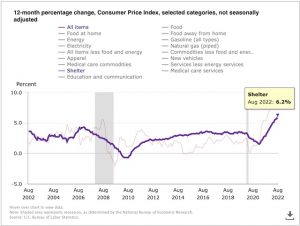 Shelter costs are likely nowhere near cooling, either. For instance, n January, the Dallas Fed predicted shelter cost inflation to peak at around 7%.

We will see what happens when September’s CPI numbers come in on October 13. But in all likelihood, inflation will continue hovering around 8%. It will be interesting to see how shelter costs contribute.

We may have already reached peak inflation. However, costs related to leasing or managing office space in NYC show no sign of cooling. The Fed has shown no interest in stopping its hike rampage, and rates are poised to continue rising well into 2023. Yet mortgage rates, while as high as they’ve been since the financial crisis, remain below the annual inflation rate. As of September 23, 2022, commercial mortgage rates stood at ​​5.57%. This mortgage vs. inflation imbalance could cause people to rush in and get a mortgage before rates further increase.

History Poised to Repeat Itself?

We’re on the brink of a nasty recession and likely already in one. To see how a 2022-2023 recession could impact New York City commercial real estate, you must look for resemblances in the 2008 and 2020 recessions.

While both recessions were different in their cause and effects, they had a similar impact on businesses going under, unemployment, and Manhattan commercial real estate occupancy rates and prices.

NYC was not as impacted by the housing bubble and subsequent financial crisis in 2008. Yet while trouble began with housing bubbles popping in markets like Miami and Las Vegas, the situation soon spread to New York City’s financial and commercial real estate sector.

In other words, the financial sector triggered the entire market’s descent. Many of New York City’s largest banks were stuck with more debt than they could handle thanks to subprime mortgages and didn’t survive. Names like Bear Stearns and Lehman Brothers may ring a bell. 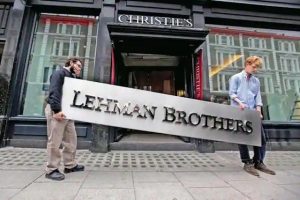 Unemployment and the New York City commercial real estate market are stronger than in 2008. Bank regulations are also tighter, and they are less reckless with lending. But the market could considerably slow if things keep up the way they are.

The Covid-19 pandemic caused real estate sectors like office and retail to grind to a halt.

Articles like “New York City is dead forever” were picked up by the New York Post because New York City was a ghost town. Not even the financial crisis caused the city to be this empty. Midtown Manhattan looked deserted, while prime office real estate like the Time Life building sat 90% vacant. Employees, if they weren’t part of New York’s record-high 16.50% unemployment rate, all worked from home. 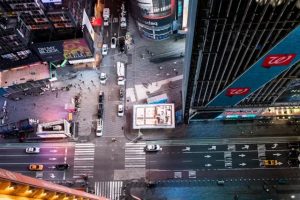 Commercial landlords adjusted their business models. The situation resulted in many office closures, relocations, and downsizing. Many office buildings sat vacant, and landlords became desperate to fill them. Some properties converted to luxury condos. Some life sciences companies even repurposed empty office spaces into lab spaces.

While it’s unlikely, we’ll ever go through a sudden economic shock like COVID-19 again, never say never. History could repeat itself with a slowdown or evolution in the Manhattan office space market. Many office tenants in NYC could continue to shift priorities based on the economic climate and their business needs.

An Odd Market Better Positioned Than 2008

2020’s freeze in New York City commercial real estate, followed by 0% interest rates and a frenzied flight to quality, has eerie similarities to the 2007 boom period preceding the financial crisis. Manhattan office leasing, after all, nearly doubled in July 2022.

But 2022 is an odd market. On the one hand, rising rates sideline potential buyers and deals. On the other hand, many lenders rush to get a mortgage before rates further increase.

Furthermore, there is a drastic difference between demand and activity for Modern Class A offices and older Class B and C offices. While Class B and C office space in NYC continues to struggle, Modern Class A is flourishing. According to CBRE, by 2021, the Class A Manhattan office market exceeded pre-pandemic figures. $100/square foot deals increased 114% year-over-year and stood 18% above the five-year historical average. 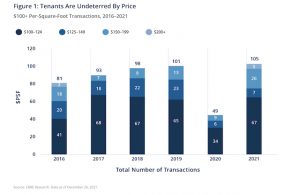 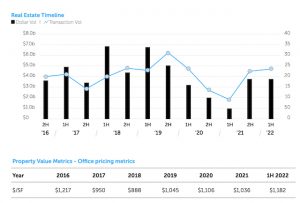 Where Does Commercial Real Estate in New York Go From Here?

Furthermore, commercial tenants can benefit from high inflation. Although commercial lease terms are shrinking, they are still longer than residential leases. Some Manhattan office leases are as long as ten years, with many including a fixed annual increase between 2% and 3%.

When inflation is higher, rental costs can decrease as a proportion of a business’s total revenue.

Once inflation cools and the recession worsens, office space rental prices will fall, vacancy rates will rise, and unemployment will increase. Yet, it will undoubtedly create a buyers market and potential deals for business tenants. Perhaps it will also cause many tenants to look at downsizing, just as they did during the pandemic.

The best thing you can do to prepare for this recession is to explore the market to understand your commercial real estate options. Make sure you know what questions to ask before leasing NYC office space.

An NYC commercial broker that’s been through recessions can help you navigate treacherous waters. Fortunately, the seas in 2022 might not be as choppy as they were in 2008 and 2020.