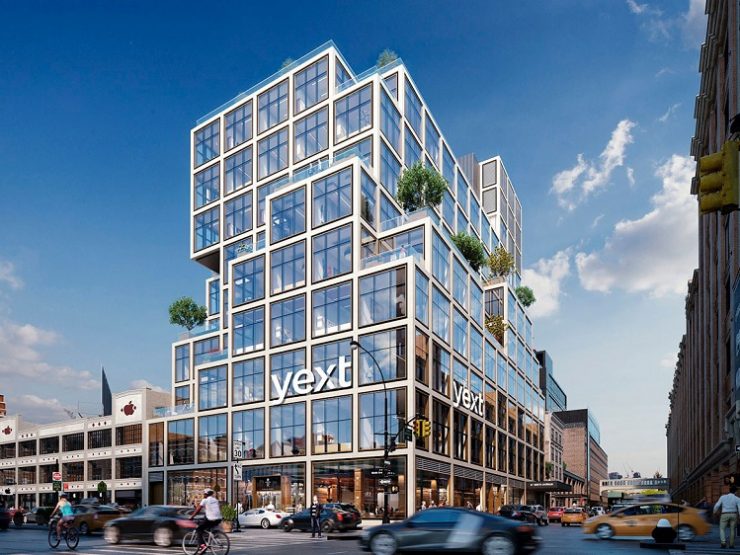 New York City-based online brand management company Yext has recently unveiled its new headquarters, located right in the heart of Manhattan’s Meatpacking District. Dubbed the Yext Building, the firm’s glossy new home is in good company, situated across the street from Google’s Chelsea Market headquarters and right next to an Apple Store.

Yext has plans to hire 500 new people in New York City over the next five years, Bloomberg reports, and has signed a 12-year lease to occupy the entire office portion of Vornado Realty Trust’s 61 9th Avenue. The tech company is expected to pay roughly $1 million per month in rent for its new office, once it moves from its current headquarters at 1 Madison Avenue.

Amenities at the Yext Building will include private terraces on each of the nine floors, a rooftop park overlooking the Hudson River, bicycle storage, high ceilings, and advanced energy saving features. The building designed by architect Rafael Viñoly will incorporate an open-office, loft-style layout that will allow plenty of natural light and encourage collaboration. Yext estimates the official move-in date to be in March 2020, pending the completion of interior redesign and build-out efforts.

Yext started out in 2006 as a 65-person startup based in Chelsea Market, and has since grown to employ roughly 1,000 tech-savvy people. The firm intends to invest more than $150 million in its new Ninth Avenue home over the next 12 years, including rent and build-outs. Yext’s efforts are aided by a $6 million performance-based Excelsior Tax Credits granted by the State of New York for a period of 10 years, according to an official press release.

Neil Goldmacher and John Moran of Newmark Knight Frank, together with Robert Karin and Leslie Kanter at Davis & Gilbert, represented Yext in the lease negotiations.

If you’re planning to set up your business in a convenient location in Manhattan, and are looking to lease space in a modern building offering state-of-the-art amenities, reach out to us and we will show you worthwhile space situated right in the heart of New York City. To learn about available office space, call Metro Manhattan Office Space at (212) 444-2241.