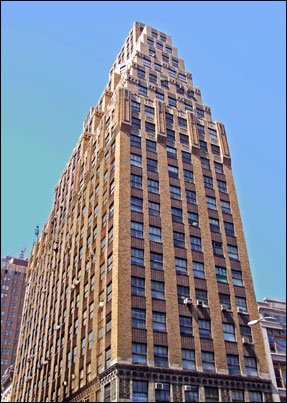 The Art Deco office building at 401 Broadway in Tribeca was built in 1930, and boasts a similar style to the Empire State Building, which was built at the same time. Designed by Jardine, Hill & Murdock, the building offers wrap-around views of Midtown South and offers loft-like office spaces suitable for businesses in a variety of industries.

The office building at 401 Broadway offers 230,000 square feet of Class B, loft-style Tribeca office space across 27 stories. It is currently owned by American Simlex and managed by ABS Partners Real Estate. Amenities at the landmark Tribeca building include high ceilings with sweeping views of Manhattan, the Hudson River and the Empire State Building, a restored lobby, FedEx and UPS drop-off, and easy access to nearby public transportation.

Getting to and from 401 Broadway

Benefitting from a convenient location in the heart of Tribeca, with the Financial District and Soho within walking distance, 401 Broadway is highly appealing to office tenants. Those working in the building have easy access to nearby transportation, including the A, C, E, N, R, J, Q, Z, and 6 trains.

Who is renting office space at 401 Broadway?

How much is the rent price for office space at 401 Broadway?

Office asking rents at 401 Broadway tend to be more affordable than the average rent commanded in Midtown South, which exceeds $80 per square foot. Class B offerings come at more affordable prices than their Class A counterparts, but they still offer all the modern features and amenities that companies nowadays look for in an office building.