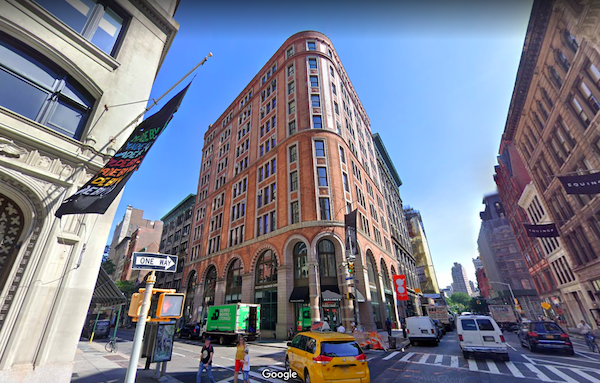 The striking building rising at 900 Broadway on the corner of Broadway and East 20th Street in Midtown South was completed in 1887. It was commissioned by the Goelet Family and designed by Stanford White of McKim, Mead & White. In 1906, four more stories were added to the Goelet Building by Maynicke & Franke. The building stands out for meeting the Broadway-East 20th Street intersection with a round corner and offers creative office space in the heart of the Ladies’ Mile Historic District.

The Goelet Building at 900 Broadway offers 110,000 square feet of Class B Chelsea office space and roughly 8,000 square feet of retail. The 10-story building is owned and managed by Justin Management, and was renovated in 1988 and 2001. Amenities include an attended lobby, oversized windows, and high ceilings, sub-metered electricity, modern HVAC, hardwood floors, and a freight elevator.

Getting to and from 900 Broadway

The property at 900 Broadway is conveniently located in Chelsea, close to a plethora of shopping, dining, and leisure destinations. Its prominent position at the corner of Broadway and East 20th Street provides tenants with ample street views and front street exposure. Public transport options are also easily accessible via the nearby 23rd Street stations, which serve the 6, R, and W trains.

Who is renting office space at 900 Broadway?

How much is the rent price for office space at 900 Broadway?

Office asking rents at The Goelet Building start around $60 per square foot – well below the average commanded in Midtown South, which often surpasses $90 per square foot. Class B assets like 900 Broadway offer more affordable rates than Class A office space, making them ideal for startups or midsize businesses looking for creative, loft-style office space.