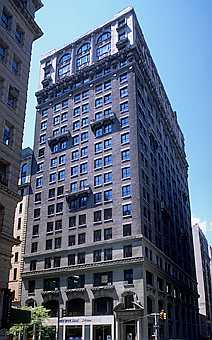 The office building at 114 Fifth Avenue in Midtown South was originally completed in 1909, to house the main offices of the California Perfume Company. It was known as the Merchants’ Exchange Building at the time, and lies within the Ladies’ Mile Historic District of Manhattan. The building was completely redeveloped in 2014, with the help of STUDIOS Architecture, which brought upgrades to both the interior and exterior of the tower.

The 19-story building at 114 Fifth Avenue offers 350,000 square feet of Class A, LEED Gold-certified Flatiron District office space. The building was acquired by Allianz Real Estate in 2015 for $220 million, from L&L Holding. The former owner continues to manage the asset, which was redeveloped in 2014.

Amenities at 114 Fifth Avenue include 24/7 security and tenant access, new elevator, heating, electric and window systems, a new lobby, a freight entrance, six passenger elevators and one freight elevator. The interior spaces have been upgraded and redesigned to suit the demands of technology, fashion, media and publishing businesses in this area of Midtown. Office floor plates average roughly 19,000 square feet.

Getting to and from 114 Fifth Avenue

The building at 114 Fifth Avenue benefits from an excellent location in the trendy Flatiron District of Midtown South, close to shopping, dining and leisure destinations. There are many nearby transportation options, as the asset is located conveniently between the 14th and Sixth Avenue subway station with access to the F, M and PATH trains, and Union Square, with N, Q, R, 4, 5, 6, and L train service.

Who is renting office space at 114 Fifth Avenue?

114 Fifth Avenue is home to various high-profile creative tenants in industries like media, fashion, and technology, as well as financial services companies. Notable tenants within the building include Mastercard, Mashable, Capital One, First Look Media, Bank of America, and Lululemon.

How much is the rent price for office space at 114 Fifth Avenue?

Office rents at 114 Fifth Avenue tend to come at a premium, given the high demand for quality, creative office space in this area of Midtown. Technology firms, media and publishing companies, and startups are highly drawn to this trendy submarket, which is part of an area once dubbed ‘Silicon Alley.’ Consequently, office rents are on the rise, and asking rents at 114 Fifth Avenue can surpass $100 per square foot.