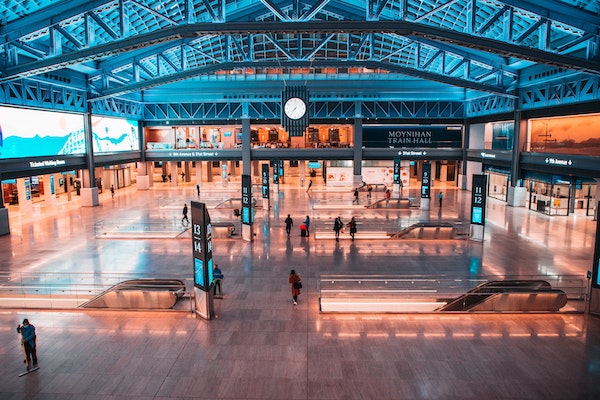 New York City’s Pennsylvania Station, most commonly known as Penn Station, is the busiest transportation hub in the entire Western Hemisphere. More than 600,000 travelers use it every day. The station has a long, rich, and controversial past, and potentially a brighter future. Penn Station was originally developed in 1910, demolished and reconstructed in the 1960s, and now is gearing up for its third incarnation.

Then: the Original Penn Station

When one thinks of Penn Station today, it’s often with nostalgia. That’s because Midtown Manhattan’s dimly lit Penn Station is not the same as it was in the 1900s. When McKim, Mead, and White designed the original Penn Station in 1910, it was a majestic and awe-inspiring work of art, an epic and elegant gateway to the heart of Manhattan.

McKim, Mead, and White were inspired by the Acropolis of Athens, St. Peter’s Square in Vatican City, and Roman architecture when they conceived Penn Station. When it was completed in 1910, it was declared a masterpiece of the Beaux-Arts style. Critics loved its imposing waiting room and train shed. At the time, Penn Station was the largest indoor space in the city and one of the largest public spaces in the entire world. It was one of the first stations to have separate waiting rooms for arrivals and departures.

The Penn Station project, included the demolition of 500 buildings in NYC’s Tenderloin District. It also included developing a post office across the street. It would later become the Farley Post Office, also designed by McKim, Mead, and White. Today, that post office houses Moynihan Train Hall, an extension of Penn Station and a tribute to the original station.

After World War II, passenger traffic declined sharply, and Penn Station became empty and difficult to maintain. In the 1950s, the Pennsylvania Railroad sold the air rights to Penn Station.

After the air rights for Penn Station changed hands, plans were made to redevelop it, reducing the size of the station and adding more commercial space. Plans called for the demolition of Penn Station, relocation of the train tracks underground, and building a commercial center and event venue above. Despite protests and attempts by preservationists and architects to save it, Penn Station was demolished piece by piece in 1963. The approval of the demolition was viewed as a ‘carte blanche for the demolition of landmarks,’ according to The New York Times. Ada Louise Huxtable said at the time that ‘the tragedy is that our times not only could not produce such a building but cannot even maintain it,’ addressing the high cost of maintaining the station. The station deteriorated during the 1940s and 1950s, and a thick layer of grime, dust, and dirt-covered its halls.

In 1968, the construction of the second Penn Station was complete. But it paled compared to McKim, Mead, and White’s original. Yale architectural historian Vincent Scully stated for The New York Times that the new station was ‘humiliating and bewildering,’ and he drew a dark comparison between the two incarnations: ‘one entered the city like a god; one scuttles in now like a rat.’

What’s Next for Penn Station?

Hidden underneath Madison Square Garden, the current Penn Station bears zero resemblance to the original. Over the years, the much smaller station could not accommodate the increased number of travelers and started falling into disrepair.

In the 1990s, Senator Daniel Patrick Moynihan presented his vision to construct the original Penn Station. The Senator had a close and personal connection to the historic structure. Moynihan often got his shoes shined in the original Penn Station in the 1930s. After years of going back and forth on the project, it finally became a reality in early 2021. Unfortunately, former Senator Moynihan did not live to see his vision fulfilled.

$16 Billion for Improvements Including Expanded LIRR Concourse and New Platforms

There are other improvements in the works for Penn Station. Officials plan to expand the LIRR concourse further, add new platforms, and renovate  Penn Station for $16 billion. But that’s not all. Former Governor Cuomo proposed ten skyscrapers around Penn Station to create a new business district to rival Hudson Yards and bring office tenants back to Midtown Manhattan. However, given the context of the pandemic and the reluctance to return to physical offices, this ambitious plan has not garnered much support.

Tax revenue generated by new office and retail towers would help pay for the renovation of Penn Station. However, officials are seeking alternative ways to pay for the project. According to some, bringing more office space to market while companies switch to a hybrid work model risks creating a glut of commercial office space. The project is under debate, but it would not be surprising for new skyscrapers to be developed around Penn Station by 2030. There is little room left to build in an urban landscape like New York City. The only way, in many areas, is up.