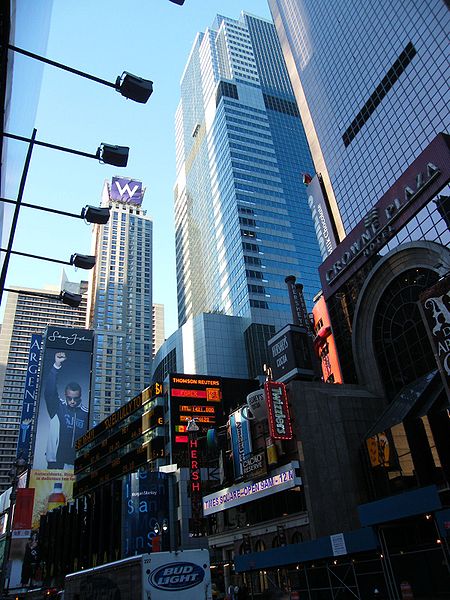 The office tower at 1585 Broadway in Midtown Manhattan was completed in 1987 by Solomon Equities, with a design by Emery Roth & Sons and Gwathmey, Siegel & Associates. Located on Duffy Square at the north end of Times Square, the tower houses the global headquarters of financial giant Morgan Stanley. At one time, law firm Proskauer Rose also occupied 17 floors within the building, and once they vacated, Morgan Stanley took over the entire building.

The Morgan Stanley Building totals 1.33 million square feet of Class A Times Square office space, and also incorporates retail space on the ground level. The 42-story building features a plethora of state-of-the-art amenities, including a private drive-through, on-site parking, a concierge, and direct electric metering for tenants. Two floors of the building are reserved exclusively for building operations. 1585 Broadway is managed by Hines Interests and owned by Morgan Stanley, and boasts LEED Gold certification for its energy efficient features.

Getting to and from the Morgan Stanley Building

Morgan Stanley’s headquarters at 1585 Broadway benefits from an excellent location in the heart of Midtown Manhattan, connecting workers to the various retail and dining destinations in Times Square. The building’s location also provides convenient access to several major subway lines, including the N, Q and R trains.

Who is renting office space at the Morgan Stanley Building?

The office portion of the building at 1585 Broadway is fully occupied by Morgan Stanley. The retail space included on the ground level houses Starbucks, Fossil, Sunglass Hut, Metro Lobby, and Baked by Melissa.

How much is the rent price for office space at the Morgan Stanley Building?

Office asking rents in the Times Square submarket are roughly on par with the Midtown Manhattan average, which reached $88 per square foot in 2019. The highly coveted location in one of the busiest areas of New York City makes office assets on Broadway incredibly appealing with office-using tenants in a variety of industries.