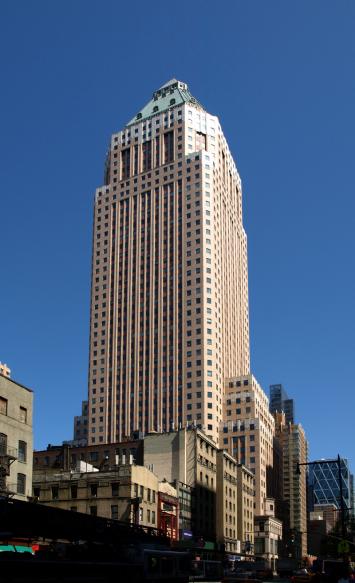 The eye-catching office tower at 825 Eighth Avenue is the tallest structure within a three-building, mixed-use complex known as Worldwide Plaza. The complex occupies a full city block in the Times Square submarket of Midtown Manhattan, and was completed in 1989 by Zeckendorf Development. One Worldwide Plaza is the tallest of the three buildings, and is crowned by a cooper roof and glass pyramid known as ‘David’s Diamond,’ in reference to the building’s architect, David Childs of Skidmore, Owings & Merrill. The building is currently owned by New York REIT and SL Green, which paid $1.4 billion to buy the asset from George Comfort & Sons in 2017. Today, One Worldwide Plaza is fully occupied by high-profile clients in industries like media, finance, and healthcare.

The tower dubbed One Worldwide Plaza features roughly 2.1 million square feet of Class A Midtown Manhattan office space across 50 stories, and was completed in 1987. The structure also incorporates 125,000 square feet of retail space and boasts LEED Gold certification for its sustainable features. The tower features no less than 3 lobbies, and offers on-site management and security, a messenger center, 473 parking spots, and 27,000 square feet of public plaza space. Office floors range from 20,000 to 72,000 square feet, and offer open-plan layouts with typical slab heights of 13 feet.

Getting to and from One Worldwide Plaza

The office tower at 825 8th Avenue is conveniently located in the heart of Midtown Manhattan, close to a plethora of restaurants, shopping and entertainment destinations. Those working within One Worldwide Plaza also have access to various public transportation options, including the C and E subway lines, which are accessible in the base of the building, and the B, D, N, Q, R, and 1 lines nearby.

Who is renting office space at One Worldwide Plaza?

How much is the rent price for office space at One Worldwide Plaza?

Office asking rents at One Worldwide Plaza hover around $70 per square foot, which is the average found in the Times Square submarket. Office space in this area comes at a premium, yet it’s significantly more affordable than the Plaza District or Hudson Yards, where rents often surpass $100 per square foot. Midtown Manhattan office space has reached a post-recession peak of $88 per square foot in 2019, due to high demand and limited availability of quality office space.