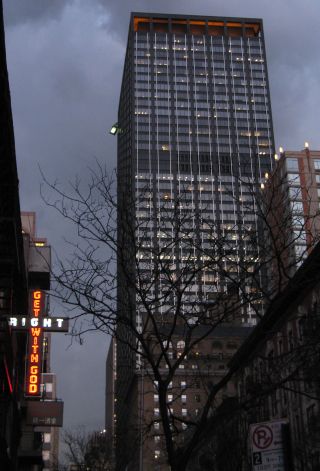 The office building rising at 1633 Broadway in Midtown Manhattan was built in 1972, on the former site of the Capitol Theatre near Times Square, boasting a design by Emery Roth & Sons. It was developed by the Uris brothers, prominent private real estate developers at the time, and dubbed the Uris Building. Nowadays, the building is known as Paramount Plaza, and it’s best known for housing two major Broadway theaters, as well as various high-profile office and retail tenants.

Paramount Plaza offers tenants 2.6 million square feet of Class A Times Square office space across 48 floors. The LEED Gold-certified building is owned by Paramount Group and was renovated in 2012. Amenities at 1633 Broadway include 24-hour concierge service and security, on-site management provided by Paramount, a 250-space parking garage, a newly renovated lobby and outdoor plaza, and exquisite views of Midtown Manhattan. The building is serviced by 38 state-of-the-art passenger elevators and 2 freight elevators, while floor plates range in size from 36,000 to 54,000 square feet of office space.

Getting to and from 1633 Broadway

The office building at 1633 Broadway offers tenants easy access to all the shopping, dining and leisure destinations in Midtown Manhattan. Paramount Plaza benefits from an excellent location near the bustling Times Square, and those working in the building have access to plenty of nearby transportation options, including the 1, 2, A, C and E subway lines. The building also houses the 1,940-seat Gershwin Theater and the Circle theater.

Who is renting office space at 1633 Broadway?

How much is the rent price for office space at 1633 Broadway?

Office asking rents at Paramount Plaza tend to be roughly on a par with the average commanded in Midtown Manhattan, an average that is close to $90 per square foot. The building’s top-notch Times Square location, coupled with its renovated, state-of-the-art amenities and prestigious tenant roster, make it highly appealing to office tenants.