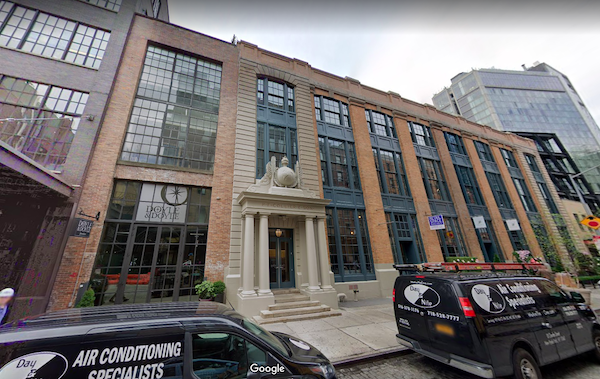 The striking low-rise office building at 416 West 13th Street first took shape back in 1901. The prominent Astor family financed the construction of the three-story property and tasked Trowbridge & Livingston to design it. The Neoclassical-style result was constructed to serve as a printing plant and office building and was leased to publishing house P.F. Collier & Son. Then, in 1929, the building was used by General Electric as a warehouse for its General Electric Appliance Co. The company used the location until the 1970s, after which various other tenants in different industries occupied the building.

The P.F. Collier & Son Building underwent a massive renovation in 2012 that converted it to office space and ground-floor retail space. The property retains its architectural charm and houses several office tenants and a restaurant on the ground floor.

Getting to and from 416 West 13th Street

The office building at 416 West 13th Street benefits from an excellent location in Midtown South, in the bustling Meatpacking District. The location offers tenants easy access to a plethora of shopping and dining options, as well as public transportation. The P.F. Colliers & Son Building is close to the Whitney Museum, Gansevoort Market, Chelsea Market, as well as the Eighth Avenue-14th Street subway station serving the A, C, E, and L lines.

Who is renting office space at 416 West 13th Street?

The P.F. Collier & Son Building is home to several office tenants, including Greenway Mews, CollabFinder, Valtech, and Playdots. The ground floor houses the Fig & Olive restaurant, providing a convenient lunch option for those working in the building.

How much is the rent price for office space at 416 West 13th Street?

Office asking rents at 416 West 13th Street start somewhere around $50 per square foot but can go as high as $80 or more per square foot, depending on the lease terms. Class B assets such as the P.F. Collier & Son Building tend to offer more affordable prices than Class A spaces, while still offering all the modern amenities creative office tenants look for nowadays.