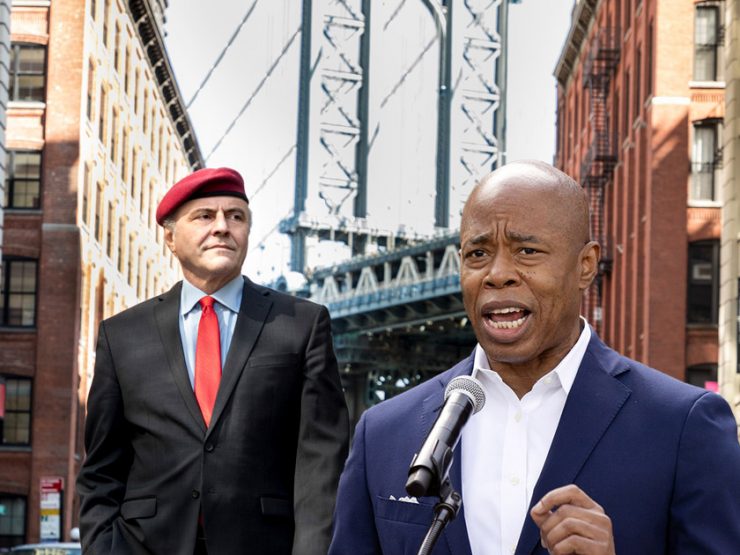 “Small Business Forward.” This is the name of an executive order the newly inaugurated mayor, Eric Adams, has signed in his first days in office. The document aims to reduce or eliminate unnecessary fines and penalties issued by city agencies such as the Fire Department or the Department of Health.

Eric Adams likes to position himself as “the first blue-collar” person to lead the city, and this is true – at least for the last 70 years of New York City’s history following Mayor William O’Dwyer. O’Dwyer was an immigrant from Ireland who started his career as a construction worker and then became a police officer, just like Adams. What is also true is that newly-inaugurated Adams enjoyed generous donations from the real estate industry and secured a reputation as a pro-business politician. But does it mean that the real estate sector will always get its way for the next four years?

One thing on the plate is Local Law 97. It mandates a 40% emission reduction in existing skyscrapers by 2030 and bans natural gas in new buildings starting from 2027. Ben Furnas, the city’s climate czar and a fierce proponent of green sustainability policies, is now gone with the city’s past administration. Eric Adams ran on eco-friendly promises but hardly ever publicly commented on it. So far, he hasn’t mentioned the reversal of Local Law 97 but implied that the city might get more involved in helping property owners to comply with the new environmental regulations. What exactly he meant remains unclear. De Blasio’s administration set a one-million-dollar annual fine for a failure to comply, while the total cost of the Local Law 97 implementation is estimated at 4 billion dollars. Affordability advocates have repeatedly expressed concerns that it may drive up rental prices for residential and commercial tenants. The costs of complying with Local Law 97 will be a real financial burden for smaller, under-capitalized landlords facing higher vacancy rates and reduced rent rolls.

Commercial Real Estate in the Aftermath of the Pandemic

During the pandemic, the total value of New York City’s office spaces dropped by almost 30 billion dollars. By the end of 2021, however, big players purchased or leased large chunks of commercial office space in New York City, signaling that the trend may be about to get reversed.

Google acquired St. John’s Terminal at Hudson River Park, spending $2.1 billion. This purchase became the most expensive deal of its kind since March 2020. Another IT giant, Microsoft, signed a new lease for half of the 300,000 square foot Flatiron building at 122 Fifth Avenue, keeping financial details undisclosed. One more tech company, Clear Secure Inc, which produces biometric travel verification products, has also announced its relocation to a new Highline office with a rent of $12 million a year.

Still, commercial rents remain significantly below pre-pandemic levels. Even the most desirable Class A buildings have seen a 10 to 15 percent price drop. Class C commercial office space is still 35 percent below what it was in late 2019. Commercial landlords have substantially increased concessions such as build-out allowances and free rent that they are offering commercial tenants. This is a sharp contrast with the residential sector, where US median rent in 2021 rose by 11% –  three times the average yearly figure before the pandemic, according to a recent report from marketplace Dwellsy.

Some analysts attribute the price increase in residential real estate to skyrocketing inflation rather than economic recovery. In commercial real estate, inflation translates into higher construction and maintenance costs. So New York City landlords are faced with the double whammy of reduced rental revenue and increased cost of concessions such as construction and free rent.

But many office and retail spaces remain empty: if measured in square footage, new leasing activity in 2021 was 40% below what it was prior to the pandemic. In addition, the Omicron surge has caused many businesses to further postpone their return to offices.

Another factor that fuels reluctance among commercial tenants to go back to in-person interaction, is the crime rate.

The NYU’s Furman Center that analyzes housing and urban policies once concluded that falling crime rates accounted for one-third of the rise in property values since 1994. Still, during the pandemic, this trend has reversed. While New York City’s murder rate remained below the national average even in 2020, it rose by 45% and remained elevated in 2021. Public safety was one of the cornerstones of Eric Adams’ campaign. Within the first 48 hours in office, he confirmed his plan to restore the plainclothes police unit to go after gangs and illegal firearms. But this measure has already faced significant backlash – advocates see it as a highly controversial proposal citing a history of excessive force used by that unit, especially against people of color.

With a high vacancy rate in commercial properties, the economic situation poses a significant challenge to Eric Adams. New York City’s unemployment rate is 9.4%, double the national average. The new mayor plans to combat that figure by asking employers to create a city database to match available jobs with people looking for work. How exactly Adams intends to make it more efficient than the existing statewide job database for the unemployed or multiple job boards such as LinkedIn or Craigslist – is unclear. What is also unclear is how he is going to cover a 3 billion dollar budget gap in a city where 40% of the revenue comes from property taxes.

What makes it especially challenging is the upcoming battle over property tax reform. The existing system gives wealthier single-family homeowners a beneficial treatment, revealed a recent Bloomberg investigation. Journalists concluded that a $157 tax bill for a $2 million Brooklyn condo is more of a pattern than an exception.

In the final days of his term, Bill de Blasio released a set of recommendations drafted by the New York City Advisory Commission on Property Tax Reform. The document suggests creating a more fair system by introducing a new tax class for small residential property owners to reduce their tax burden and offering tax breaks for those with incomes below $100,000. All these recommendations are not mandatory, but earlier this fall, Eric Adams promised to make property tax reform one of his top priorities. Analysts, however, emphasize that sticking with de Blasio’s approach has a caveat: it was based on the idea of a zero-sum game, meaning that tax cuts for one group translate into tax increases for another. This, in turn, may result in another wave of departures of the city’s wealthiest residents – which has already happened at the beginning of the pandemic.

Adams, however, proposed three additional measures: a once-a-week sales tax holiday, a two-year suspension of the commercial rent tax, and a two-year suspension of property tax debt interest for the hotels. It’s not entirely clear how the new administration would make up for the loss of $1.5 billion in revenue that would be lost from the suspension of the commercial rent tax below 96th Street, except for increasing taxes for wealthier homeowners. Therefore, the future of these tax relief proposals for commercial tenants remains uncertain.

Meanwhile, restaurants – that looked forward to hosting corporate parties and end-of-year celebrations – are still struggling amidst the surge in Omicron cases. Among places that closed their doors forever in the past year are a number of iconic venues such as “21 Club” which was launched as a “speakeasy” in 1930. Even larger players are having a hard time surviving. One of them is Cipriani, which has been facing foreclosure on a $53 million loan backed by its two restaurants in New York.

Despite anxiety about property tax reform, what is booming is New York City’s luxury apartment market. One report, for example, says that a record number of high-end condos – twenty-two, with each worth over $4 million – were sold during the week ending January 2nd.

Increasing the number of available apartments in the wealthiest neighborhoods is Eric Adam’s plan to combat the problem of affordability, according to his own words on Ezra Klein’s New York Times podcast. In particular, Adams referred to SoHo, Chelsea, Gramercy Park, Union Square, Midtown around 34th street, and Park Avenue. He suggests building more and building higher, and this would require major rezoning of previously “sacred” areas to obtain sufficient air rights for taller properties. The new mayor will almost certainly face resistance from local residents. His predecessor, in contrast, promoted new construction in the outer boroughs of New York City.

Another part of the new mayor’s plan is a conversion of private offices and hotels into residential buildings, which has already started to occur on the market.

After the AKA Wall Street hotel fell behind on its mortgage payments during the first lockdown in the spring of 2020, the lender converted it to a luxury apartment complex within three months. One of the upcoming conversions is the Excelsior Hotel on the Upper West Side. Unlike some other hotels, it wasn’t used for providing temporary housing for the homeless throughout the pandemic. It had been used for this purpose between 2016 and 2019 and has remained closed since the first lockdown. This was until its long-term owner, Harry Krakovsky, chose to sell the property.

For tenants looking for office space in Manhattan, all of this may mean fewer options and higher prices. Whether increasing the number of available properties within the wealthiest Manhattan neighborhoods and converting office spaces and hotels will reduce rents for residential tenants remains to be seen. A big factor here is the future of the 421(a) tax break that is set to expire in June.

This exemption is tied to the city’s existing program promoting affordable housing while significantly reducing property taxes for new rental buildings. The real estate industry that backed Eric Adams is expected to push back on this tax break’s expiration.

Another worrying aspect for developers is that Adams also approved a recent law introducing special permits for all new hotel construction in the city. The idea was backed by the Hotel Trades Council that supported Adams on the campaign trail. Opponents say that the measure makes hiring non-union members for new projects difficult and, overall, complicates any new construction. This policy has already been challenged in courts.

There is one more consideration that may affect the overall policies of the new administration. Governor Kathy Hochul is running for re-election in 2022. Unlike her predecessor, she doesn’t seem to be at odds with New York City’s mayor – moreover, she made an onstage appearance to celebrate Adam’s victory in November. Access to his base of Black, Latino, and moderate voters would be highly beneficial for Governor Hochul in light of the gubernatorial campaign. There is a strong expectation that Adams is likely to endorse her. It’s not surprising, considering the state controls many resources needed for the city’s recovery. So it may not only be the amount of real estate campaign donations but also the numbers of less wealthy New Yorkers that will have an impact on the decision-making process at City Hall. At least for the first year.