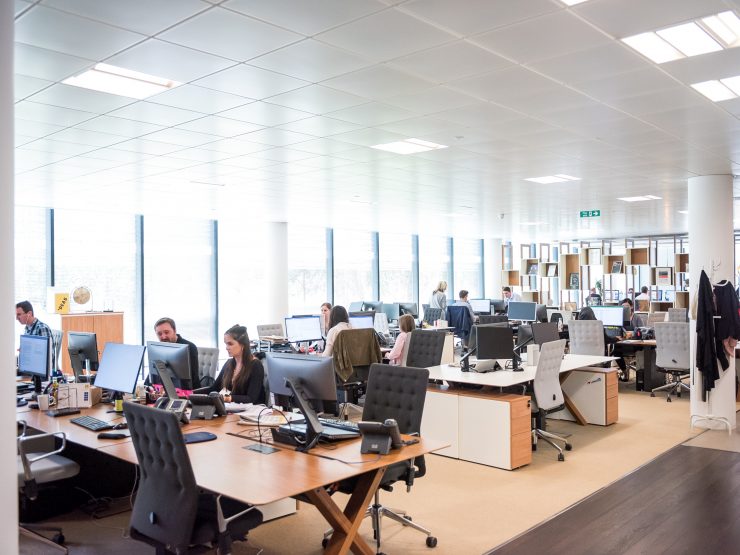 Cadillac had established a presence in Manhattan in 2014, and invested $12.7 million building out its space at 330 Hudson Street. The space included an experiential showroom featuring a rotating art gallery dubbed Cadillac House, the Commercial Observer reports. However, Cadillac’s efforts to distance itself from General Motors didn’t prove to be a successful endeavor, and the automobile manufacturer moved back to Detroit last fall, leaving behind the top floor of the 16-story, 467,000-square-foot building. The historic office building will welcome DeVito/Verdi on June 3rd, the official move-in date for the firm.

DeVito/Verdi’s sublease at 330 Hudson expires in 2025, according to Crain’s. Jessica Verdi of Colliers represented the tenant, while CBRE’s Zachary Price and John Nugent represented the sub-landlord.

The distinguished new tenant at 330 Hudson will be moving from its long-time home on the top two floors of 100 Fifth Avenue, just off Union Square. The ad agency was drawn to the new space by the open-space layout, the 14-foot ceilings, 10-foot glass panel windows, and the sweeping views of Lower Manhattan and the Hudson River.

“It’s a phenomenal space with great views, a great layout and a location that will further inspire our creative and digital teams,” Ellis Verdi, president of DeVito/Verdi, said in a statement. “We started downtown, but downtown didn’t look like this in the 90s.  It’s great to be part of this vibrant, modern neighborhood.”

DeVito/Verdi, which has worked with high-profile clients such as Mount Sinai, Macy’s, BMW and Grey Goose, is not the only new tenant to join the 330 Hudson roster. Earlier this year, Deloitte expanded its footprint to 95,000 square feet at the building, reportedly signing a sublease with Pearson in March. 330 Hudson Street also has a fairly new owner: Boston-based AEW Capital Management paid $385 million in early 2018 to acquire the Manhattan office building.

The limestone building at 330 Hudson Street was designed by Charles Haight and originally built back in 1910. It served as a warehouse for the Waterman Pen Company, and then for the Masback Hardware Company, which vacated the premises in 1979. Following the decline of the manufacturing industry in the area, the property underwent an adaptive reuse effort and was eventually converted to office space in 2013. American architecture firm HOK spearheaded the renovation, which included a complete overhaul of the original eight-story building. The project included the insertion of a transitional brick envelope that ‘merges the base building with the modern glass-and-aluminium curtain wall of the tower’s eight-floor addition,’ according to HOK. After the renovation, the building was awarded LEED Gold certification from the USGBC, and currently includes 15,000 square feet of ground-floor retail space. Tenants include Deloitte, TripAdvisor, Pearson, TED Conferences, and AdTheorent, among others.

Are you thinking of setting up your business in a convenient location in Manhattan, and are looking to lease space in a modern building offering state-of-the-art amenities? Then reach out to us and we will show you worthwhile space situated right in the heart of New York City. To learn about available office space, call Metro Manhattan Office Space at (212) 444-2241 or head over to Metro Manhattan.com.