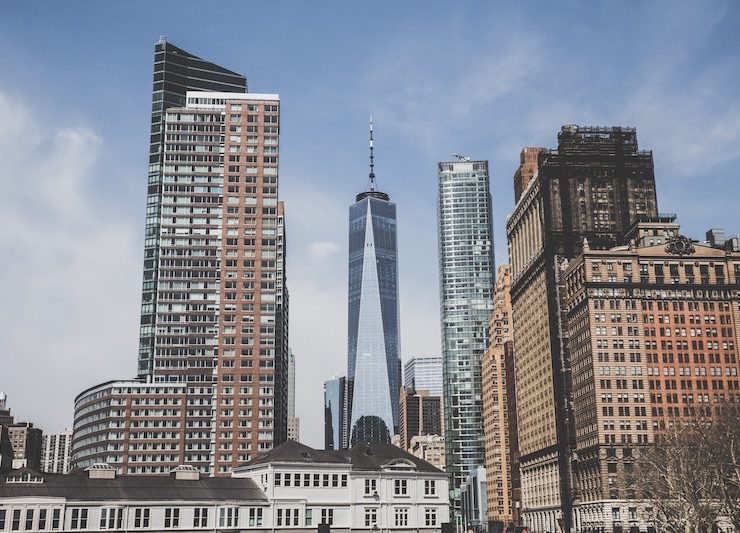 The revitalized World Trade Center neighborhood in Lower Manhattan continues to attract high-profile tenants looking to benefit from state-of-the-art office space and a strategic location right in the heart of the city’s bustling Financial District.

The latest tenant to join the FiDi roster is Chicago-based architecture and design firm Skidmore, Owings & Merrill (SOM), which signed a lease with Silverstein Properties last week to occupy 80,000 square feet of office space within 7 World Trade Center, a building that they also designed. The firm will move its New York workforce to the 1.7 million-square-foot tower in April 2020, according to an official release, and will be the first architecture firm to do so. SOM will reportedly sublease the space from Moody’s, which is currently the largest tenant at 7 WTC.

SOM operates its New York office from 14 Wall Street, a building that has served as the company’s home since 1998. According to the Commercial Observer, SOM currently occupies 66,300 square feet on the building’s 24th and 25th floors, and is set to move its 408 Downtown Manhattan employees to 80,000 square feet on the 27th and 28th floors of 7 World Trade Center. After the move in 2020, four of SOM’s biggest offices, namely in New York, Los Angeles, San Francisco and London, will be located within SOM-designed buildings. The four offices will also all be LEED- and WELL-certified, as part of the company’s sustainability initiatives.

SOM Design Partner Chris Cooper, FAIA, who served as the senior designer of 7 WTC, attributed the firm’s move from 14 Wall Street to the fact that ‘the way we work has changed.’ In an official press release, he stated that ‘As we welcome a new generation of leadership at SOM and look toward the future of the firm, we are excited to move into a new kind of workspace—one that is filled with daylight, offers sweeping views of New York City, and puts sustainability and flexibility at the forefront.’

Construction of the new 7 World Trade Center building commenced back in 2002, roughly one year after the original 7 WTC collapsed following the 9/11 attacks. SOM’s David Childs partnered with developer Larry Silverstein and glass artist and designer James Carpenter to create a safe and sustainable glass-clad tower that would signal the rebirth of Lower Manhattan in the aftermath of 9/11. The development of the 52-story, 1.7 million-square-foot office tower was aided by $475 million in federal Liberty Bonds, with a total project cost estimated at $700 million. The Liberty Bonds program was created to help revitalize Lower Manhattan and give developers access to $8 billion in low-cost tax-exempt financing, to encourage construction in the neighborhood.

The development of 7 WTC was heavily focused on safety, and many consider it one of the safest skyscrapers in the U.S. The tower has a reinforced concrete core, and sits atop a concrete base as well. Exit stairways are much wider than those in the original building, and are equipped with fans and vents to ensure they won’t be filled with smoke in case of a fire. According to Architectural Record, steel columns also feature much thicker fireproofing, while emergency power supplies for the building are located away from the footprint, since fuel tanks for generators were said to have stoked the fires causing the original building to collapse.

SOM’s 7 WTC also broke new grounds when it comes to sustainability, as it was the first commercial building in New York City to earn LEED certification from the USGBC. Some of the energy efficient features at the LEED Gold-certified tower include the use of recycled structural steel, insulation and interior materials, and floor-to-ceiling windows that provide plenty of natural light, eliminating a lot of the need for artificial lighting inside the occupied spaces. 7 WTC also uses collected rainwater to irrigate the small Ken Smith-designed park on site, as well as to cool the building. Silverstein and SOM’s award-winning project incorporates 1.7 million square feet of World Trade Center office space, and also houses an electrical substation powering much of Lower Manhattan on its first 10 floors.

Speaking about SOM’s new lease at 7 WTC, Larry Silverstein declared that he was immensely proud of the collaboration with the architecture firm. ‘This building set a new standard for the 21st–century office environment, and jump-started the transformation of Downtown and the World Trade Center into a magnet for the world’s most innovative companies,’ said Silverstein in an official statement. ‘SOM did a spectacular job designing this building, which feels as new and exciting as it did when we opened it 13 years ago. It gives me great pleasure to welcome them home.’

SOM might not be the only major new tenant at 7 World Trade Center. Moët Hennessy is reportedly considering moving its New York headquarters from its current base at 85 10th Avenue in Chelsea to 90,000 square feet of space at 7 WTC.