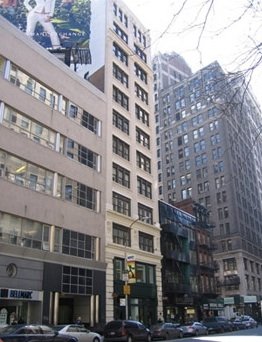 The William H. Birkmire-designed building at 928 Broadway in Midtown South was originally completed in 1909 as a factory loft. Situated within the historic Ladies Mile District between Chelsea and the Flatiron District, the building was converted to boutique office space in 1979. The property is currently owned by Grunberg Realty, and underwent cosmetic renovations in 2011. Nowadays, it is home to various office tenants in creative industries like fashion and media, as well as businesses in the legal sector and education.

Interior spaces feature high ceilings and original wood floors. The common spaces, including hallways and bathrooms, have been renovated. Air conditioning can be adjusted by floor, and thermal windows contribute to the building’s energy efficiency.

Amenities at 928 Broadway include 24/7 security and doorman, cable and high-speed internet connections, and the building is also pet-friendly.

Getting to and from 928 Broadway

The building at 928 Broadway benefits from an excellent and desirable location in Midtown South, at the border between Chelsea and the Flatiron District. Consequently, those working within the building have easy access to a plethora of shopping, dining and entertainment destinations close by, as well as various public transportation options. The office building is located just one block away from the subway, connecting tenants to the F, M, N, R, and 6 trains.

Who is renting office space at 928 Broadway?

How much is the rent price for office space at 928 Broadway?