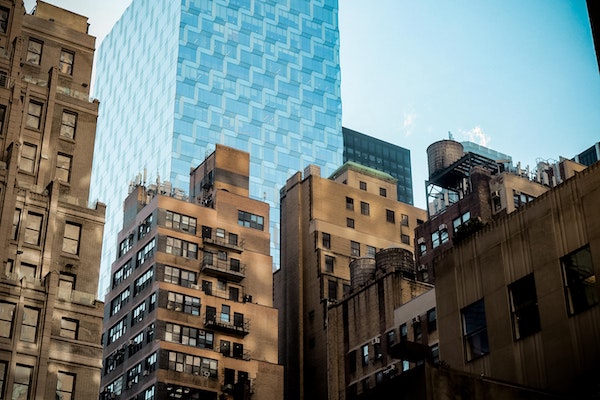 Over the past few months, New York City commercial real estate has gone through a whirlwind of changes, some of them permanent. The coronavirus has solidified remote work as a feasible and productive way of working, and many companies will not go back to the office anytime soon. This trend is likely to have a significant impact on the city’s burgeoning office market, and changes are already starting to show.

Buying trophy office assets in Manhattan has been a preferred strategy among both national and offshore investors for many years. However, the uncertainty surrounding the evolution of the pandemic is making some investors think twice before signing multi-million-dollar deals.

A recent report released by Ariel Property Advisors shows that real estate transaction volume in Q2 2020 dropped to the lowest level in a decade. What’s more, commercial real estate in NYC recorded a total amount of roughly $368 million for the first half of 2020, marking a 78% decrease year-over-year. By comparison, in the first half of 2019, commercial assets in the city traded for a combined dollar volume of $1.65 billion.

Given this unprecedented situation, we were curious to see which were the most significant office sales to close in the first half of 2020. While some commercial property owners are holding off on their assets, some investors continue to bet on the NYC office market, making long-term investments. Read on to see some highlights from the first six months of the year.

Amazon Bets Big on NYC Office Market, Even During a Pandemic

Manhattan continues to appeal to office investors, even as uncertainty looms, and the pandemic continues to wreak havoc on the city. The borough was home to 14 of the 20 office sales on our list, with Brooklyn landing five deals on the list and Queens making one appearance, as well.

The biggest office deal of the first half of the year was closed by retail giant Amazon. Jeff Bezos’ company shelled out $978 million to acquire the Lord & Taylor Building at 424 Fifth Avenue in late March. Amazon purchased the historic retail building from WeWork, which bought it in 2019 and planned to convert it to office space. Following WeWork’s financial troubles, the coworking provider decided to part ways with the 660,000-square-foot building. Now, Amazon plans to convert the property to modern office space to serve as its New York City headquarters.

The second-biggest office deal of H1 2020 was Munich RE’s acquisition of 330 Madison Avenue. The German corporation paid $900 million to buy the 846,000-square-foot Midtown Manhattan office building from the Abu Dhabi Investment Authority. The sale had been in the works for quite some time, as the two parties entered into a contract back in November 2019, according to the Daily Beat. The 40-story, LEED Gold-certified office tower was renovated in 2011 and houses tenants including HSBC and JLL, as well as retailers like Starbucks and Santander Bank.

The first half of 2020 was a slow one for New York City commercial real estate. Though there were a couple of trophy sales, compared to the previous years, transactional activity was modest, with only 5 of the top 20 sales closing above the $100 million mark. The result is that Brooklyn landed five office sales on our list, led by the $88.8 million sale of 1630 East 15th Street, which was the 8th biggest office sale of H1.

The low-rise office building located in Brooklyn’s Midwood neighborhood changed hands in February when Nightingale Properties sold it to Urban Edge Properties. The previous owner had recently completed an expansion of the property known as Kingswood Center in 2019. The sale of 1630 East 15h Street was part of a portfolio acquisition that included office and retail space at Kingswood Center and Kingswood Center II.

Rounding out our list of the 20 largest office sales of H1 2020 is a $9.98 million sale in Queens’ Flushing-North neighborhood. BongHo Ha and MiKwang Ha purchased the Central Funeral Home property at 162-14 Sanford Avenue from America Realty LLC  in early March. It was the only office sale outside of Manhattan and Brooklyn to make the list of the 20 biggest deals of H1 2020. You can check out the full list with details below.

More and more companies are allowing employees to continue working from home until the pandemic subsides, while others, like social media giant Twitter, are making it permanent. Social distancing guidelines, coupled with a reluctance from workers to go into a physical office, make it hard for some businesses to justify renting an office space in NYC. The most recent example is that of The Daily News, which is closing down its headquarters at 4 New York Plaza for good.

Other companies are opting for a different route, taking over bigger office spaces that can ensure that social distancing rules are met. The best example is that of Facebook, which recently leased 730,000 square feet of office space at the historic James A. Farley Building in NYC, otherwise known as the Post Office Building. Facebook’s move is a signal that investing in New York City commercial real estate is still one of the best long-term decisions businesses can make.

We extracted all office sales to close in NYC from January through June 2020 from the Department of Finance’s Rolling Sales database. Other sources we used include the building classification from NYC.gov, the NYC Department of Finance ACRIS, as well as proprietary research in local media outlets.