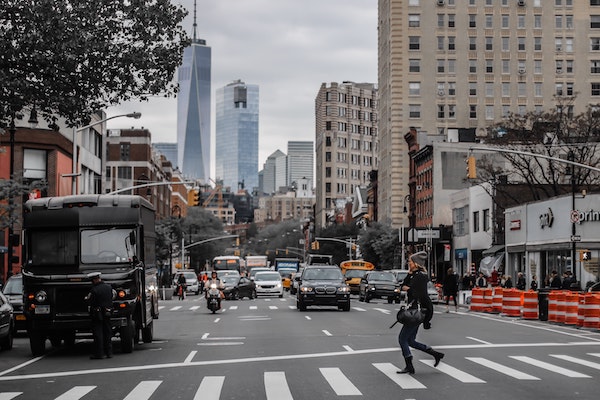 The New York City office market has been going through a rough patch caused by the Covid19 pandemic. However, recent transaction activity highlights the fact that investors continue to see the long-term appeal of this bustling market. Our research into the biggest NYC office sales of 2021 shows that the Manhattan office space scene is heading for recovery.

The list below includes the largest office transactions to close from January through September 2021 in NYC. Based on our research into public sales data, it was a busy summer for office investors – 4 of the 5 sales on our list closed in June. But there are even bigger office deals currently in the making. Google announced plans to purchase St. John’s Terminal for a whopping $2.1 billion – the highest amount paid for a U.S. office building since 2018. Additionally, German investor Commerz Real is in contract to purchase 100 Pearl Street in Downtown Manhattan for $850 million. These two deals are expected to close in the following months, and they signal the start of a comeback for the market.

The biggest single-building office sale to close in New York City in 2021 took place in June. Northwood Investors paid close to $234 million to purchase the Soho office building at 524 Broadway from the Propp Family. The sale is part of a two-property portfolio deal between Northwood and the Propp Family. This deal included the smaller office building at 520 Broadway, which fetched a sale price of $87.8 million. Northwood paid a combined total of $325 million for the two properties located in the heart of Midtown South. According to The Real Deal, the two buildings offer 180,000 square feet of office space and 60,000 square feet of retail space. 524 Broadway, the larger of the two assets, incorporates 124,000 square feet of Soho office space. Tenants include Marc Jacobs, Aritzia, and The Corcoran Group, among others.

In June, Wafra Capital and Nightingale Properties paid $220 million to acquire the fee interest in 111 Wall Street from Omnispective Management, in the second-largest office deal of the year. The transaction comes one year after Wafra and Nightingale purchsed the leasehold interest in the FiDi office tower for $175 million.

111 Wall Street is a 24-story, Class B property featuring 990,250 square feet of Financial District office space. It was completed in 1968 and is about to undergo an extensive, $500 million upgrade. The new owners of the property plan to reposition the Lower Manhattan building into a Class A office destination. The renovation will include customizable office space by Studios Architecture, touchless and intelligent technologies throughout, and a 40,000-square-foot tenant amenity area across the basement and ground floor.

June was a busy month for office transactions in NYC. Speer Street Capital paid close to $204 million for the eight-story office building at 641 Avenue of the Americas. The deal was part of a $325 million portfolio transaction that included the adjacent property at 635 Avenue of the Americas. The seller was S.L. Green, one of the largest office landlords in New York City. The 1987-built property offers close to 150,000 square feet of Class A Chelsea office space. It is conveniently located in the heart of Midtown South, at the site of a former department store in the Ladies’ Mile Historic District.

The interiors were completely renovated in 2006 by Cook + Fox Architects, and the team added a 3,600-square-foot rooftop garden. The renovations earned 641 Avenue of the Americas the first LEED Platinum certification in the city. Tenants at the boutique office building include S.L. Green, Infor, and Staples.

The $192 million sale of 909 Third Avenue was one of the priciest office transactions of the year, and it also closed in the summer. According to The Real Deal, Vornado Realty Trust purchased the leasehold interest in the property in 1999. The company paid $1.6 million per year in ground rent to 601W Companies. This June, Colonnade Management paid close to $192 million to purchase the 2-acre lot from 601W Companies. The 1.3 million-square-foot Midtown Manhattan office building was completed in 1967, designed by Emery Roth & Sons. Notable tenants include Boston Partners, Allergan, and Procter & Gamble.

The fifth-largest office deal to close in NYC happened in May, when DivcoWest bought a mixed-use commercial real estate property from Jamestown. The property, located at 323-325 Hudson Street in Soho, fetched a $134 million sale price. Built in the 1960s as industrial property, it was converted to Manhattan office space in the late 1990s. The 193,813-square-foot building also incorporates retail space, as well as data center space. Tenants include RCN, Industrious, SUNY College, and Verizon. The asset is conveniently located next to Disney’s new headquarters, with neighbors including Google, N.Y. Genome Center, and NYU Langone Health/Biolab.