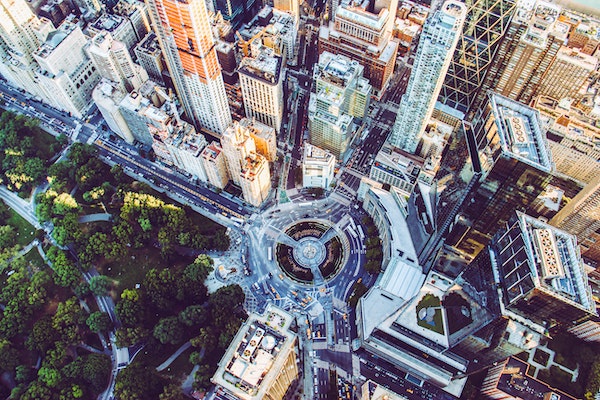 Columbus Circle is situated at the southwest corner of Central Park and it’s one of the busiest intersections in all of New York City. This historically significant part of Midtown Manhattan was established in the 1870’s, with the well known Columbus Monument being built in 1892. Office space at Columbus Circle represents an excellent option for tenants looking at Class A and Class B buildings that are conveniently located near Central Park, The Metropolitan Opera, or Carnegie Hall. It also offers a variety of famous, upscale restaurants perfect for dinner dates or business lunches, including the Russian Tea Room at 150 West 57th Street.

If you are looking for premium Class A office space in New York City, the Columbus Circle neighborhood is worth considering. It consists mainly of Class A and B office buildings, with asking rents ranging from $60 per square foot at 1776 Broadway to $110 per square foot at the Deutsche Bank Center, for example. This neighborhood is also a great fit for medical office tenants, and several buildings are known to welcome medical and healthcare practitioners – a few examples include 1776 Broadway and 200 West 57th Street.

One of the most prominent buildings in this area is the Deutsche Bank Center (also known as One Columbus Circle and Time Warner Center). This 55 story Class A mixed-use building complex is a great fit for companies looking for 15,000sqft of office space or more.

This neighborhood also provides easy access to public transportation via the 59th Street subway station. It connects office workers to various shops, restaurants, and major office buildings such as the Deutsche Bank Center. It’s also a popular and convenient work destination for commuters, especially those living on the Upper West Side, which is a short walk away.

What are the best office buildings in Columbus Circle, and why?

When we say “best”, we are really talking about a good fit for a particular type of business. For instance, the office space needs of law firms demand private, soundproofed meeting rooms for confidential client talks. On the other hand, fitness studios require large, open spaces, high ceilings, and state-of-the-art HVAC, to name a few.

In this article, we are providing a list of buildings which we consider to be a good fit for a variety of tenants seeking office space in the Columbus Circle neighborhood.

If you are looking for office space in the Columbus Circle area, please call Metro Manhattan Office Space at (212) 444-2241 or use our contact form and we will help you find good options that fit your company’s commercial office space needs.

This Class A, 116,443-square-foot building at 1776 Broadway is one of the best destinations for businesses looking to rent office space in Columbus Circle. Built in 1927 and designed by Joseph Gilbert, the 25-story tower is conveniently located in the heart of the neighborhood, close to Central Park, Broadway, and various public transportation options.

The property was renovated in 2019 and offers spaces ranging from 900 sq ft offices, which are perfect for healthcare professionals or legal services professionals, to 5,600-square-foot full-floor spaces. Offices can be rented both short-term and long-term (3 to 7 years) and include amenities such as on-site property management, large windows, exposed ceilings, natural light, great views of Manhattan and state-of-the-art security. The building owners have recently invested $20 million in a capital improvements program that renovated the lobby, building facade, and common areas.

Tenants currently include HearUSA, Yung Chin, Clarion Research, OptionMetrics, Shatzkin & Mayer, PJM & Sons, and Nordstrom. Spaces are primarily delivered in a white box state; however, build-outs and improvements can be negotiated with the landlord.

This Cass Gilbert-designed building at 200 West 57th Street was completed in 1916 as a residential property. It was converted to commercial office space and medical space in 1964 and renovated in 2007. The Feil Organization purchased the Class B, 135,000-square-foot asset in 2015 and invested $2 million in renovations that brought upgrades to the building’s lobby, hallways, common areas, and offices.

Another strong option for businesses looking for Columbus Circle office space for rent is 250 West 57th Street. Completed in 1921, the former Fisk Tire Building was designed by the renowned architects at Carèrre & Hastings, Shreve, Lamb & Blake. It features 535,665 square feet of Class A office space as well as ground-floor retail space. The Budlong, owned by Empire State Realty Trust, was fully renovated in 2017. The renovations included a new Gensler-designed lobby, a restored facade, new windows and elevators, and new electrical, plumbing, security, and HVAC systems.

250 West 57th Street is located just steps away from Carnegie Hall and Deutsche Bank Center. It provides direct in-building access to the Deutsche Bank Center/Columbus Circle subway station. Floorplates range from 9,000 to 27,000 square feet so that the building can accommodate all types of businesses, from startups to mid-size companies and large institutions requiring an entire floor.

This 369,800-square-foot Class A office tower at 156 West 56th Street was designed by Helmut Jahn of Murphy/Jahn and completed in 1987. It is one of the tallest mixed-use skyscrapers in the city, featuring office, residential, and showroom space. Owned and managed by Tishman Speyer, the building also known as CitySpire, features 23 floors of commercial office space. Floors 24 through 75 are privately-owned residential units, and the first floor is dedicated to retail space.

Office floor plates range from 15,000 to 20,000 square feet. The building offers amenities such as an on-site conference room, daycare and event space, on-site security, 24/7 security and access, and a 100-car parking garage. The tower was renovated in 2004 and also incorporates a 50,000-square-foot showroom.

Speaking to an experienced commercial real estate broker is always valuable, and we encourage you to contact us with your office space needs and requirements.

For your consideration, we’ve also selected several groups of properties that appeal to specific needs of tenants, to aid in your search for finding commercial office space at Columbus Circle:

The 5 Most Affordable Class B Office Buildings in Columbus Circle

Are you thinking of setting up your business in a convenient location in Manhattan? Are you looking to lease space in a modern building at Columbus Circle? To learn about available office or retail space, call Metro Manhattan Office Space at (212) 444-2241 or email us at [email protected].