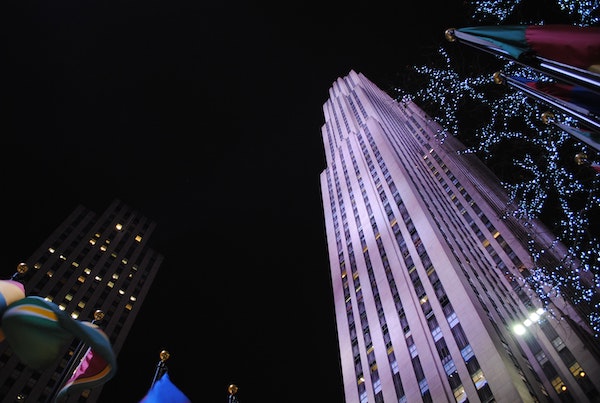 The holiday season in New York City is exceptional. The city has many long-standing traditions that delight locals and visitors alike. These include the Macy’s Thanksgiving Day Parade, the Citi Pond at Bryant Park, or the Christmas Spectacular with the Radio City Rockettes. But one of the most popular holiday traditions is the lighting of the Rockefeller Center Christmas Tree.

The iconic Christmas tree is displayed at Rockefeller Plaza, between West 48th and 51st Streets and Fifth and Sixth Avenues, usually from mid-November through early January. Over the years, the tree has become the main attraction for New Yorkers, visitors, and tourists each winter. According to numbers from the Rockefeller Center website, roughly half a million people pass by the tree daily while it’s on display. 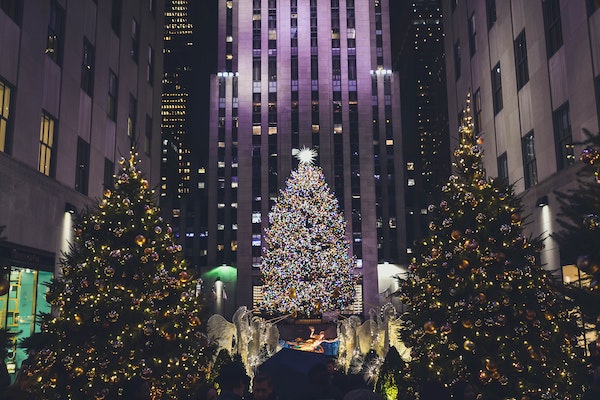 The history of the Rockefeller Center tree dates back to the Great Depression. In 1931, the 14-building Rockefeller Center complex was still under construction. Workers pooled money together to buy a 20-foot balsam fir and place it right in the middle of the muddy construction site. They decorated the tree with “strings of cranberries, garlands of paper, and even a few tin cans.” This would become a holiday tradition known and celebrated around the world.

The first “official” Christmas tree was unveiled in 1933, described as “a holiday beacon for New Yorkers and visitors alike.” The now-popular skating rink opened in the plaza in 1936; this was just a few years when two trees were installed in Rockefeller Plaza instead of one. 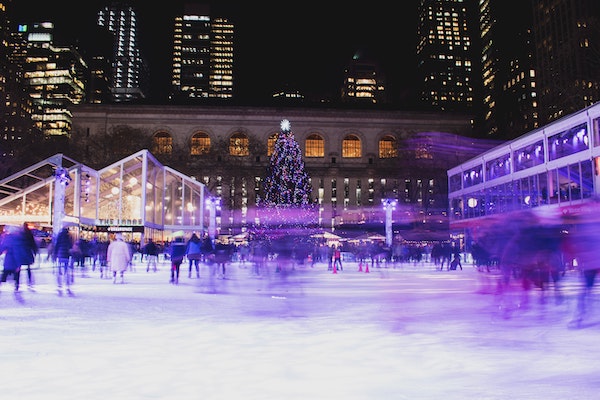 In 1944, the Rockefeller Center tree was unlit due to blackout regulations at the time. Decorators adorned it in blue, red, and white, the same colors found on the American flag. The modest tree also had to be decorated with materials that were not essential on the war front.

After the war ended, the Rockefeller Center Christmas tree, a symbol of peace and hope, gradually grew in size. Because larger trees were being used each year, workers began using scaffolding in the 1950s to install and decorate them.

In 1951, NBC broadcast the tree lighting event live, with a special on The Kate Smith Show, one of the most popular television programs. Three years later, artist Valerie Clarebou’s iconic horn-blowing angels made their debut in Rockefeller Center, and they’ve been on display in the plaza every year since.

Since 1997, the lighting event has been broadcast live on NBC, with Al Roker as the original host. The on-site event usually includes musical performances by contemporary artists, and the tree lighting takes place at around 10 PM. 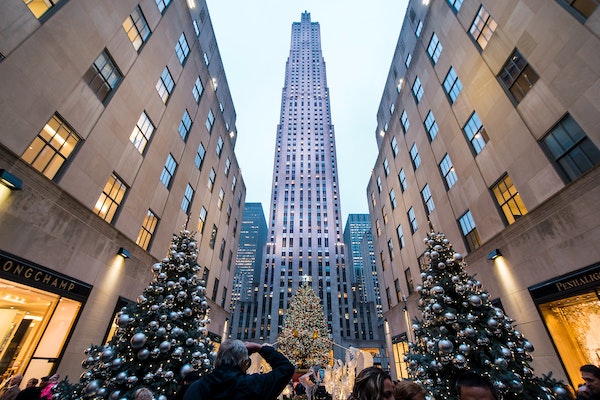 The most iconic Christmas trees over the years

In 1966, the Rockefeller Center Christmas Tree checked off a unique milepost. That year marked the first time that the Christmas tree came from outside the U.S. The Petawawa Forest Preserve donated the tree from Ottawa to celebrate Canada’s centennial.

Another milestone year for the Rockefeller Center tree was 1999 when a 100-foot Norway Spruce was delivered from Killingworth, Connecticut. It was the tallest tree ever installed at Rockefeller Center, a record that still stands today.

The Rockefeller Center Christmas tree was decorated with energy-efficient LED lights for the first time in 2007. It was also the first time the tree was milled into lumber and donated to Habitat for Humanity after display for residential construction use.

This year’s Christmas tree arrived at Rockefeller Center on November 14. The traditional Christmas tree lighting event took place without a live audience, with the public invited to join the celebration from home, watching it live on NBC.

The 2020 Christmas tree is a 75-foot, 11-ton Norway Spruce hailing from Oneonta, New York. Norway Spruces have been used almost every year since 1931 because of their height and near-perfect proportions. However, when the tree first arrived in Manhattan, it was not welcomed with the same excitement as in past years. The media dubbed the misaligned, slightly defeated-looking tree as ‘on-brand for 2020.’ A small dehydrated owl was also found hiding in the branches and was quickly transported to a wildlife rehab facility.

However, the disappointment lifted on December 2, when the tree was revealed in its full LED-twinkling glory. The tree had been a bit worse for wear after traveling 200 miles, tightly secured, to reach its destination in Midtown Manhattan.

The Rockefeller Center Christmas tree is decorated with more than 50,000 multi-colored LED lights. The lights are connected via roughly 5 miles of wire. At the top of the tree sits a 900-pound Swarovski crystals star designed by architect Daniel Liebeskind in 2018. The massive star features 70 spikes and 3 million Swarovski crystals with Oznium LED lighting spots.

To avoid contamination with the new coronavirus, visitors can see the tree via special entrances and strict traffic patterns. Every person has five minutes to admire the tree, while masks and social distancing are required at all times. On Christmas Day, the tree lights will shine for a full 24 hours. The visiting hours on New Year’s Eve are from 6 AM to 9 PM. The Rockefeller Center Christmas tree will remain lit at Rockefeller Plaza until the evening of January 3rd.  It will then be removed and donated to Habitat for Humanity.

A beacon of hope in times of crisis

This year many NYC holiday traditions have been canceled or held without a live audience. Macy’s Day Parade, the Christmas Spectacular with the Rockettes at Radio City Music Hall, Macy’s Santaland, the Citi Pond skating rink at Bryant Park – these are some of the most anticipated holiday events in NYC. Though some of these holiday traditions were absent in 2020, there is still much to enjoy this winter.

The Rockefeller Center tree is open to visitors who follow safety restrictions, while retail window displays are once again the main attractions. Macy’s, Bergdorf Goodman, Saks Fifth Avenue, Louis Vuitton, and Bloomingdale’s boast some of the season’s most stunning window displays. It’s worth walking around Midtown Manhattan to take a look. Who knows, you might even find yourself starting to feel some of that Christmas spirit, which is understandably not as prominent this year.