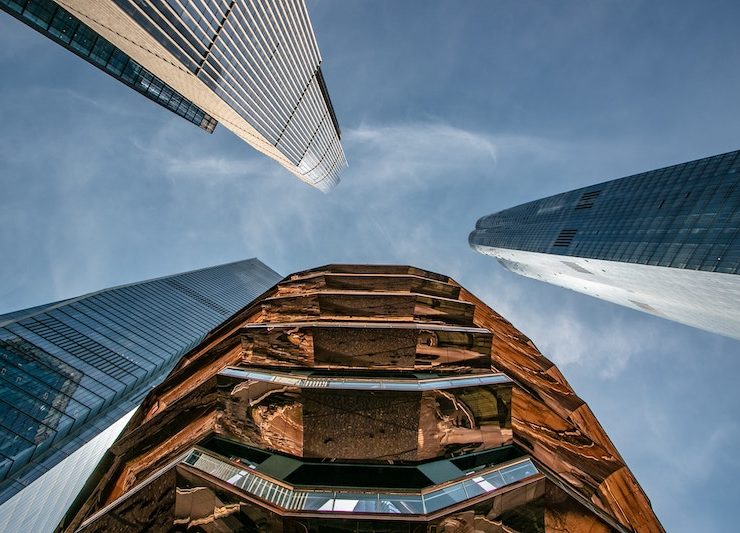 The success of tech companies like Google, Apple, Facebook or Amazon has caused a major shift in the real estate industry. The old limestone buildings lining the streets and avenues of Midtown Manhattan don’t quite match the needs of these fast-growing companies and their young, tech-savvy workforce. Many were shocked at the $150 million sale of the iconic Chrysler Building earlier this year. It turns out that owning a Manhattan landmark isn’t as enticing–or as profitable–as it used to be.

The exorbitant office rents commanded in areas like the Plaza District or Park Avenue also tend to drive away startups and young businesses looking for room to grow, and these startups end up with offices in coworking hubs like WeWork, which is now the biggest office tenant in the city. As for the big players, the established corporations that have been present in the city for decades, the need to attract and retain young professionals has led them to rethink how, and more importantly where they operate their business.

The search for new building opportunities has led developers to the Far West Side of Manhattan, where a neglected industrial district has been transformed into the new business epicenter of New York City. Hudson Yards, the biggest private real estate development ever undertaken in the U.S., has managed to become, in the span of a few years, the most sought-after business district in Manhattan, and it’s only halfway complete. The $20 billion project spearheaded by Related Companies and Oxford Properties will ultimately feature more than a dozen office and residential skyscrapers, public spaces and cultural venues, and is expected to bring more than 57,000 jobs to the neighborhood. The first phase of the mega-project is officially complete, and numerous big-ticket names have already joined the office tenant roster at the glossy towers of Hudson Yards.

The high demand does have a downside, in that it pushes office rents upward. CBRE data shows that asking rents in Hudson Yards rose 40 percent in the span of one year, and have now surpassed $100 per square foot, making the neighborhood the priciest business cluster in the city. Even so, this doesn’t seem to deter prospective tenants from seeking out office space in the area.

Who is Renting Office Space in Hudson Yards?

The towers at 10, 30, 50 and 55 Hudson Yards all have tenants already lined up, even though some of them are still under construction. Residential occupancy is also underway at 15 and 35 Hudson Yards, and more buildings are planned for the second phase of the project.

Besides the new skyscrapers developed by Related, there are two other major commercial projects attracting big office tenants to the Hudson Yards neighborhood, namely Brookfield Properties’ Manhattan West and The Spiral, currently being developed by Tishman Speyer. Together, the towers of Hudson Yards, Manhattan West and The Spiral will bring roughly 17 million square feet of new office space to the New York City market. That’s 17 million square feet of office space that Midtown and Downtown Manhattan will be missing out on, and many more companies are expected to make the move to Hudson Yards.

Should You Relocate Your Business to Hudson Yards?

Initially, companies were drawn to Hudson Yards because it offered modern, state-of-the-art office space and all the amenities that attract tech-savvy tenants, including floor-to-ceiling windows, flexible, airy floorplans, room for expansion, and top-notch energy efficient features. All these modern features came at a much better price than in Midtown Manhattan, where office rents kept rising higher and higher.

But things have changed since the early days of Hudson Yards, as the project’s popularity drove office rents to surpass those found anywhere else in the city. The neighborhood is currently the most expensive in New York City, with office asking rents resting at $118 per square foot at the end of 2018, according to CBRE. By comparison, asking rents in Midtown closed the first quarter of 2019 at $87 per square foot, while Downtown rents hover around $76 per square foot.

So affordability is no longer the driving factor attracting tenants to Hudson Yards. Instead, companies are eager to operate in a new live/work/play neighborhood that is well-connected to other parts of the city, and that attracts a tech-savvy workforce. Boasting a Hudson Yards business address has become just as prestigious as running an office on Broadway or Wall Street. Consequently, if what you’re looking for is prestige, flexibility, connectivity, and top-class neighbors, then you might want to consider leasing an office in Hudson Yards over Midtown, Downtown or Uptown.