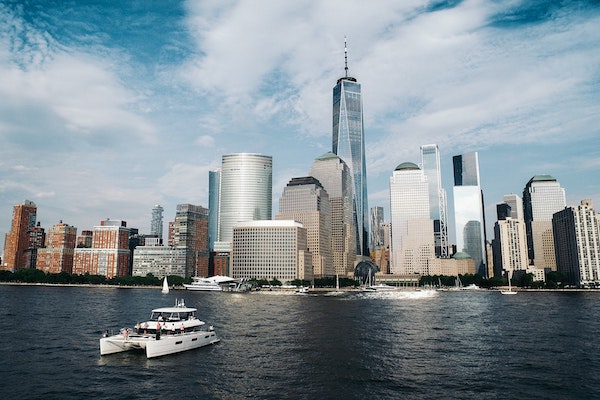 Office spaces featuring breathtaking city, park, or river views command a premium in New York City. Abundant natural light, outdoor space, and expansive views are some of the most sought-after amenities for companies seeking office space for rent in Manhattan. Luckily, there is no shortage of supertall buildings in the city, especially in office-heavy submarkets like Downtown or Midtown.

Lower Manhattan is home to some of the largest multinational corporations in the world which receive local service from major law firms, financial services companies, or technology startups. It’s also home to some of the tallest, and most innovative office towers in the world, including One World Trade Center, the tallest building in the United States. Lower Manhattan’s office skyscrapers offer some of the most exquisite views in the city due to their location on ‘the tip of the island.’ Below is a round-up of the ten tallest office buildings in Lower Manhattan. These buildings offer spectacular river and city views, as well as state-of-the-art amenities and unrivaled prestige.

The One World Trade Center is the tallest building in the United States and the entire Western Hemisphere. It was completed in 2014 on the former 6 World Trade Center site and designed by Skidmore, Owings & Merrill. The 3.1 million-square-foot office tower incorporates column-free office space with floor-to-ceiling windows that offer breathtaking views of New York City. It is home to major tenants, including Conde Nast, Moody’s, CBS, Cushman & Wakefield and Ameriprise.

Completed in 2018, the 2.8 million-square-foot tower dubbed 3 World Trade Center is the second-tallest office building in Lower Manhattan. The 80-story tower offers state-of-the-art Class A office space, as well as a 5,000-square-foot terrace on the 17th floor, providing beautiful views of the city. The tenant roster at 3 WTC includes various high-profile names, including GroupM, which occupies 700,000 square feet of office space, Uber, Diageo, and McKinsey & Co.

This 2.5 million-square-foot office tower at 4 World Trade Center was completed in 2013 and is currently the third-tallest office property in Downtown Manhattan. Designed by Fumihiko Maki, the 72-story property houses the headquarters of the Port Authority of New York & New Jersey, online music streaming giant Spotify, Morningstar, and Eataly. It has also earned LEED Gold certification from the USGBC for its energy-efficient features.

This 1930-built tower at 40 Wall Street, also known as the Trump Building, competed with the Empire State Building, the Chrysler Building, and the Woolworth Building for the title of New York City’s tallest structure. It was eventually surpassed in height by the Chrysler Building. In 1995, the Trump Organization invested $200 million in renovations, bringing much-needed upgrades to offices and common areas. Today, 40 Wall Street is one of the most desirable addresses in Manhattan for financial services companies.

This Class A, 2.2 million-square-foot office tower at 28 Liberty Street was designed by world-renowned architect Gordon Bunshaft of Skidmore, Owings & Merrill. It was completed in 1963 and continues to be one of the tallest buildings in Lower Manhattan. The NYC Landmark resembles Chicago’s Inland Steel Building, also designed by Bunshaft. The property offers excellent views of Manhattan and incorporates a theater/cinema, an outdoor plaza with a sunken Japanese garden, and state-of-the-art event space on the 60th floor.

The Goldman Sachs Tower at 200 West Street is the sixth-tallest office building in Lower Manhattan. It was completed in 2009 at over $2 billion and serves as the global headquarters of Goldman Sachs. The Henry Cobb-designed tower provides unrivaled views of Battery Park and Downtown and features unique amenities like the Sky Lobby, a double-height amenity space featuring skylights and river views.

This 55-story tower at 60 Wall Street was designed in a neoclassical style and built to serve as J.P. Morgan & Company headquarters. Starting in 2001, 60 Wall Street became the American headquarters for Deutsche Bank. This was after the company’s previous location was damaged in the 9/11 terrorist attacks. In 2018, the German bank announced it would be moving to the Time Warner Center in Columbus Circle. The tower’s $150 million renovations were announced in 2021, spearheaded by KPF.

The 2.2 million-square-foot office tower at 165 Broadway, also known as One Liberty Plaza, was completed in 1973 and is one of the tallest buildings in Lower Manhattan. The building was renovated after it suffered damage on 9/11 due to its proximity to the World Trade Center complex. One Liberty Plaza offers sweeping views of the Hudson River, the East River, and the New York Harbor and provides tenants with column-free, Class A Manhattan office space for rent.

Designed by David Childs of Skidmore, Owings & Merrill, the 1.7 million-square-foot office tower at 7 World Trade Center was completed in 2006. The building is one of the greenest office properties in the United States. And was the first-ever commercial building in NYC to earn LEED certification from the USGBC. 7 WTC offers expansive views of Manhattan and the Hudson River. It is also considered one of the safest skyscrapers in the country.

This 52-story office tower at 200 Vesey Street is part of the five-building commercial office complex known as Brookfield Place, the largest urban project to be built in Manhattan since Rockefeller Center. 200 Vesey Street was completed in 1985, boasting a design by Cesar Pelli & Associates and breathtaking river and city views. The property used to house the global headquarters for Lehman Brothers and today, it houses the world headquarters of American Express.

Are you thinking of setting up your business in a convenient location in Manhattan? Are you looking to lease space in a modern building offering state-of-the-art amenities?  To learn about available office space, call Metro Manhattan Office Space at (212) 444-2241 or email us at [email protected]