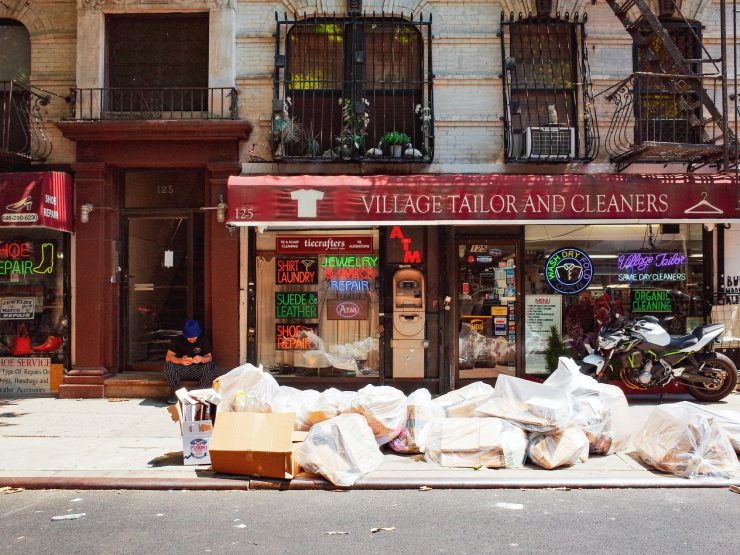 If you search “Garbage in New York City” on YouTube, you’ll find tons of nightmarish videos; they show a disgustingly dirty town. Those of us who live and work here have seen the situation worsen in the past few years. For tenants looking to rent commercial office space in NYC, this is becoming a major concern. Businesses leave their trash bags on the curb for pick-up as required by law simply because there is no other space for garbage in Manhattan.

But the rest of the trash being scattered on the streets of New York City, is a perfectly avoidable problem – if only people cared and didn’t litter. There are many more nuances, including implications for real estate prices. Let’s examine this issue in detail.

Garbage has been a massive issue in the city since the establishment of New York in the early 1600’s. At the time, it was known as New Amsterdam. For example, one of the city documents from that era, cites people used to throw dead animals into public spaces. Horses were the primary transportation in the city – and they created enormous amounts of filth. The situation remained unchanged well past the invention of photography in the late 1820’s, which is why historical pictures like this one are available. But in 1895, New York became the first American city to adopt a public waste management system. In the 1920s, horses got replaced by cars – which became a source of less visible pollution.

But after years of promoting public transportation and limiting transit through Manhattan, New York City enjoys relatively acceptable air quality. It is well below the top ten most polluted American cities, according to the American Lung Association. Still, New York City generates more waste than any other place in the United States – 12,000 tons of it, every single day. It’s a mind-blowing number even compared to other global megacities. But does it mean that New York is the dirtiest of them? Some scientists argue that it is an indicator of financial well-being. The logic is simple: wealthy populations consume more and, thus, throw away more. So the question here is not only about the amount of waste by itself but rather, what the city ends up doing with all of its garbage. Surprisingly, New York City performs much better on many environmental indicators than many major cities in the South that don’t produce as much waste. But New York City doesn’t do as well as Tokyo – another huge metropolis comparable with New York, including the amount of trash produced. The difference is that Tokyo adopted an aggressive zero-waste recycling policy. New York, by contrast, only recycles one-fifth of its waste. It lags behind not only Tokyo and San-Francisco – but even behind its own recycling goals set by two previous mayors, Michael Bloomberg and Bill de Blasio.

One of the factors is that the city doesn’t store its own trash. Since it closed Fresh Kills in Staten Island and got rid of other major landfills twenty years ago, New York City has started shipping its garbage to other places. This explains why New York state escaped the list of the top twenty states with the most trash per capita in landfills – despite the amount of waste produced. Out-of-state shipping eliminated the city’s close proximity to landfills, which on its own would decrease property values by 10 to 15 percent. But the city’s garbage transfer stations landed in less prosperous neighborhoods of North Brooklyn, Southeast Queens, and the South Bronx, making them even less attractive. The same policy ballooned the price tag for the city’s waste management program –  the total cost of shipping the trash has reached 429 million dollars a year. According to Columbia University Professor Steven Cohen, the city is left “at the mercy of the market,” with unpredictable prices for storing garbage in other states. This reduces the resources the city could otherwise spend on collecting services – just like what happened during the pandemic. In summer of 2020, when the City Council cut over 100 million dollars from the Department of Sanitation, residents faced a 60% decrease in garbage collection, resulting in endless piles of trash across the entire city. However, poor neighborhoods that COVID hit the hardest suffered from the same issue even more. Some examples are the Corona neighborhood in Queens and two areas in Brooklyn, Bushwick, and East New York.

How did this happen? Does the city clean some areas better than others? The reality is more complicated. New York City, in fact, collects only what’s left from residential tenants at their buildings and what pedestrians leave in public trash bins. Together, this makes up for only a quarter of the city’s total garbage. Tenants who lease Commercial Spaces in NYC have to pay private companies to perform garbage removal, which is obviously not affected by budget cuts. It may be tempting to suggest that areas with a higher concentration of businesses remain cleaner, but that’s often not the case.

First, these business districts generate the majority of the city’s trash, which includes disposable coffee cups and plastic food containers. Businesses are only mandated to pay for the removal of trash within their own premises, not for what is left on the sidewalks adjoining their property, which includes 18 inches from the curb going into the street. These areas have to be cleaned by the property owners as required by law. When it comes to the tens of millions of square feet of New York City office space, commercial leases vary regarding the landlord’s obligation to remove the trash and provide cleaning services. Class A office building owners remove rubbish daily and offer cleaning services for their tenants several times a week. Tenants of Class B and C office buildings can enjoy these services, but they usually have to pay for them.

On occasions when businesses and residential tenants generate an excessive amount of rubbish they end up misusing bins meant for the public, which worsens the situation further. When you add debris from everyday construction, this ends up accounting for the 6.4 million tons of New York City’s annual garbage. This becomes a perfect recipe for the overflowing public waste bins that we see today.

Shortly before the pandemic, the city administration divided it into 20 commercial waste zones, with only three private garbage carriers in each. The idea was to increase the efficiency of truck routes and reduce pollution. But as the new rules were only finalized in February of 2020, it could have contributed to confusion for businesses as the lockdown began. With higher vacancy rates in the commercial office space sector, many spots became no one’s responsibility.

Still, most of 311 complaints about garbage or litter during the pandemic referred to trash hot spots in parks in far-away areas of the Bronx and Brooklyn. This should not be surprising since many social activities such as dining moved to outdoor spaces due to COVID. However, parks are not a responsibility of the city’s Department of Sanitation – they are cleaned by the Department of Parks, which was likely not prepared for such an increased workload.

What’s interesting is that in 2017, only 32% of New Yorkers were bothered by problems associated with waste collection. In 2009, when streets were at their cleanest, the number of concerned New Yorkers was at 42%. In 1998, when New York City was only a little bit dirtier than it was before the pandemic, it was half of the city’s population. The conclusion from these figures is that most New York residents seem to care less about this issue in recent years. Are we getting used to living in a dirty city?

These attitudes present a sharp contrast with what the real estate industry thinks. 60% of property appraisers, 55% percent of realtors, and 36% percent of business development officials across America believe that litter would decrease property values and, thus, commercial rents. The National Association of Home Builders once calculated that scattered garbage might cut prices by 7%. All these statistics come from Keep America Beautiful – one of the largest anti-littering nonprofits in the country. It’s not without controversy, though. This nonprofit was established by the cigarette-producing company Philip Morris, and later funded by Coca-Cola. However, waste from both companies’ products, such as cigarette butts and plastic bottles – are widely known for contributing significantly to the country’s public litter. So critics believe that instead of changing their business practices, these companies only transfer responsibility to consumers who buy their products. Still, the viewpoint expressed by real estate professionals in that survey gives a glimpse into their thinking: it’s much easier to market any product with an attractive package. The same is true for the surrounding environment: people are more willing to buy things in a safe, pleasant looking and clean setting. In some cases, these concerns incentivized businesses to take better care of adjoining public spaces, even though they were not mandated to do so.

Union Square, Bryant Park, and Madison Square in Manhattan are examples of this approach. Private partnerships sponsored by nearby businesses hire cleaning services and security guards to enhance a sense of safety in green spots. These private partnerships rent park spaces to other companies for holiday markets or similar events, which helps increase foot traffic even further.

Waste Removal is Not the City’s First Priority

The city’s new administration is brainstorming ideas on covering the budget gap. The problem of the city’s waste may get buried under a thick layer of many other urgent matters: the continuing pandemic, crime, and battles over property taxes and tax breaks for developers. Still, there is a hope that lower rents for commercial real estate may attract small businesses and entrepreneurs to Manhattan, once the omicron surge is contained. At the same time, larger commercial real estate players are diversifying their portfolios, adding more residential assets, and converting empty office buildings to apartments. Well-kept residential buildings are unlikely to become a solution for New York City’s trash problem, but they may improve the appearance of different areas, making them attractive to tenants looking to rent commercial office space in their vicinity.