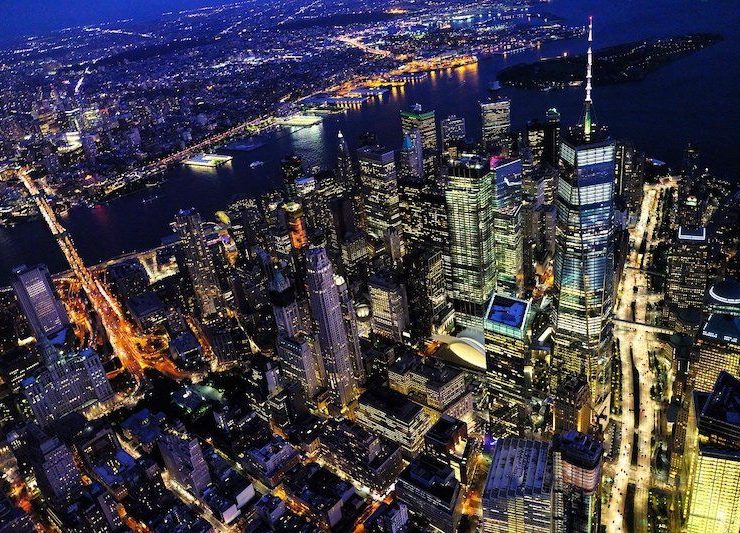 Office development in New York City is more intense than ever, fueled by steady job growth in the metro and a constant influx of tech businesses leasing and expanding office space in NYC. As a result, the city boasts the largest office construction pipeline in over a decade, according to a 2019 report by Marcus & Millichap.

More than 14 million square feet of office space was under construction at the time of the report, with development concentrated around Hudson Yards, which is reaching Phase II, but also in Brooklyn and Queens. Amazon’s near-land in Long Island City sparked interest from developers, who are keeping busy on Jackson Avenue, while in Brooklyn, Dock 72 and The Wheeler are ready to welcome office tenants.

Manhattan, however, remains the destination of choice for businesses, and office rents in the borough certainly reflect this fact. Not even Amazon could keep away. That’s why our analysis is focused on Manhattan exclusively, and on three of its most sought-after office markets: Midtown, Midtown South and Downtown. We wanted to see which parts of the city added the most office space over the past decade. Hudson Yards might be the hottest submarket for office space right now, but 10 years ago, it wasn’t even on the map. That’s also why it’s absent from our analysis; the submarkets are those defined by the data providers, and construction was still ongoing in this neighborhood back in 2010, so there is no data to compare.

Midtown Manhattan is the priciest part of the city, by far. Office rents here often surpass $100 per square foot, especially in the glossy new towers in Hudson Yards or the Class A skyscrapers in the Plaza District or on Fifth Avenue. Consequently, it’s no surprise that office developers are harder at work here than in any other area of NYC: Midtown managed to add more than 28 million square feet of new office space from 2010 through 2019.

By comparison, Midtown South recorded the highest percentage increase in its office inventory, expanding by 34.2% over the past decade. The submarket added more than 23 million square feet of new office space since 2010, which reflects its growing popularity. Flatiron, Chelsea and the Meatpacking District have become highly sought-after by creative office tenants; tech giant Google is basically taking over Chelsea, gradually expanding its office footprint in the neighborhood.

The Lower Manhattan office inventory also expanded considerably over the past 10 years, aided by heavy redevelopment in the World Trade Center area. This submarket added 18.6 million square feet of new office space from 2010 through 2019, marking a 20.5% increase in inventory. Now let’s zoom in to see which submarkets welcomed the most office space over these past 10 years.

In Midtown South, office development was focused around Hudson Square, which added close to 15 million square feet from 2010 through 2019 – a whopping 137.4% increase in inventory. That makes Hudson Square the most active submarket in terms of new office construction over the past decade, by far.

Hudson Square has become a hotspot for tech businesses and corporate giants alike in recent years. The Walt Disney Company announced it would be moving its NYC headquarters to Four Hudson Square, while Google is building a $1 billion office campus covering 315 and 345 Hudson Street, with an additional outpost in the works at 550 Washington Street.


The second-busiest Midtown South submarket was Soho/Noho. Historically a target submarket for creative businesses, startups, fashion and artists’ studios, this neighborhood continues to attract office tenants, and the high demand led to a 53.3% growth in the neighborhood’s office inventory. That’s also the second-highest percentage increase out of all the Manhattan submarkets covered in our analysis.

The Plaza District in Midtown Manhattan was the second most active submarket in terms of office construction throughout the past decade. The prestigious neighborhood, home to a plethora of global corporations and financial institutions, added 12.4 million square feet of office space from 2010 through 2019, increasing its inventory by 16.9%.

Grand Central also kept quite busy during the past decade, expanding its office inventory by 14.9% and adding more than 7.3 million square feet of office space. The neighborhood’s proximity to Grand Central Station, which connects workers to every other part of the city, makes this submarket one of the most sought-after destinations for office tenants in NYC.

The Penn Plaza/Garment District submarket was also a target for office development during this past decade. Here, developers added 3.1 million square feet of office space, and expanded the inventory by 18.6% in the past 10 years – the highest percentage growth recorded by any Midtown submarket.

Moving further south towards Lower Manhattan, we see that the World Trade Center was the third-busiest office submarket in the borough in the past decade. The neighborhood added close to 12 million square feet of office space from 2010 through 2019, surpassed only by Hudson Square and the Plaza District.

The Financial District also expanded its office inventory by 10.1%, adding 4.8 million square feet of office space during the past 10 years. It was followed by Tribeca/City Hall, which saw 1.8 million square feet of new office space come online, translating into a 10.6% increase in inventory. In recent years, Tribeca has become one of the most expensive neighborhoods to live in New York City, and its excellent location at the border between Midtown South and Downtown also makes it a highly desirable destination for creative office tenants.