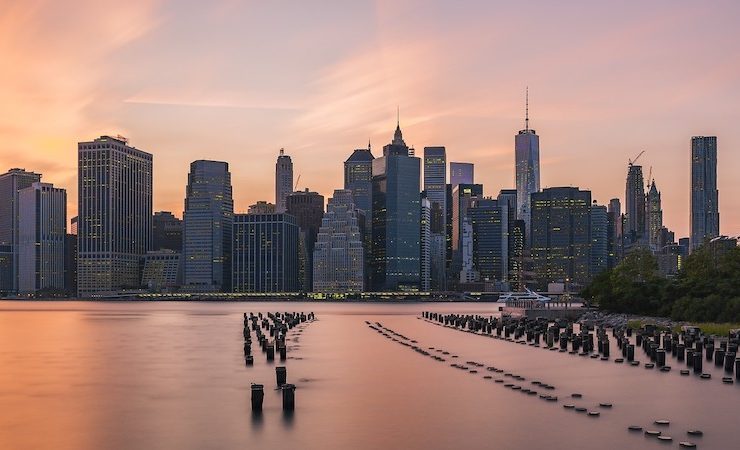 The New York City commercial real estate market enjoyed a thriving first half of 2019. After a busy first quarter that saw some major deals closed by giants like WeWork, Related and Chetrit Group, the year’s second quarter upped the ante, recording even bigger sales and more intense leasing activity.

Market fundamentals are very healthy at the moment, with NYC total employment reaching 4.65 million workers in May 2019, and 53,700 jobs created this year so far, according to Cushman & Wakefield. Commercial real estate developers have picked up the pace, and more than 16 million square feet are currently under construction in the city.

The new deliveries will finally temper the intense demand for quality space in areas like Midtown and Midtown South. The past quarter marked the 10th consecutive quarter of positive absorption for Class A office space, according to JLL, while office leasing activity in Manhattan reached a 25-year high of 18.3 million square feet through June, per Cushman & Wakefield.

The New York City market has obviously not lost its appeal to investors; on the contrary, demand continues to surge, and major office and retail leases keep getting signed every month. Office-using tenants are drawn to the new availabilities in Midtown and Midtown South, including Yext in the Meatpacking District, and Flatiron Health and Microsoft in SoHo.

In terms of sales, the market was equally active during the first half of the year. The second quarter recorded a balanced mix of high-profile office, multifamily and hotel sales, across Manhattan, Brooklyn, Queens and the Bronx. The 101-story tower at 30 Hudson Yards was completed in Q2, and it was also the object of the biggest sale of the past three months.

We’ve compiled a list of the 20 biggest commercial real estate transactions to close in NYC during the second quarter of 2019. Just like in Q1, Manhattan was top dog in Q2, home to 15 of the sale on our list. However, our ranking includes some big sales in Queens, Brooklyn, and also 3 notable sales in the Bronx. Check out the list below and keep reading for some highlights.

Unsurprisingly, 15 of the 20 biggest commercial sales of Q2 closed in Manhattan, amounting to a combined $5.1 billion in dollar volume. Investors continue to bet on Midtown Manhattan office space, with most of the sales involving office buildings in this submarket. Neighborhoods like SoHo and Chelsea have become highly appealing to tech companies like Google or Microsoft, while the state-of-the-art office towers at Hudson Yards also continue to land high-profile leases and sales.

The biggest commercial sale of the quarter closed at the newly completed 30 Hudson Yards in mid-June. WarnerMedia, which occupies 1.5 million square feet at the 101-story tower, closed a $2.1 billion sale-leaseback of its office condo to Related Companies. Warner, now part of AT&T, will continue to lease the space, which runs from the 14th through the 51st floors, until 2034. According to an official release, AT&T will use the proceeds from the sale to reduce its debt, following its $85 billion takeover of Time Warner last year.

Allianz also got in on this mega-deal, partnering with Related to snag a $384 million, 49% stake in the tower. The company also owns a 44% stake in the nearby 10 Hudson Yards, which it bought from Related for $420 million. Hudson Yards is clearly becoming the business epicenter of the city, and companies are willing to bet on its long-term success, even if it’s only half-complete. The Hudson Yards area is in such high demand, that office asking rents here have surpassed all other submarkets in NYC, rising well above $100 per square foot.

The top Manhattan sales of Q2 weren’t all for office buildings, though. CIM Group landed the top multifamily sale of the quarter, shelling out $200 million for the luxury condo portion of 165 East 66th Street. The Upper East Side tower, also known as The Hanley, was fully owned by Crescent Heights previous to the April sale. The company sold the condo portion of the tower to CIM Group and the $10 million garage section to another buyer. Crescent Heights now retains ownership of the ground-floor retail condo at the building.

Manhattan was also the backdrop for the only hotel sale on our list. Worth Capital Holdings 52 LLC paid $175 million to purchase the ground beneath the Dream Downtown Hotel in Chelsea from 346 West 17th Street LLC in June. Built in 1966, the building at 346 West 17th Street previously served as the Covenant House homeless shelter. The ground lease for the building was previously held by an affiliate of Dream Hotel Group and Indian conglomerate Sahara India Pariwar, according to The Real Deal.

The fifth-biggest commercial real estate sale of Q2 closed in Queens in May, in Long Island City. TF Cornerstone purchased the property at 55-01 2nd Street from the Holterbosch Family for $285 million. The 326,000-square-foot lot currently houses a 183,797-square-foot warehouse, but the new owner has other plans for the site.

TF Cornerstone intends to build four 400-foot-tall residential towers with more than 2,000 rental apartments, just a few blocks from what should have been Amazon’s new headquarters. The company, headed by the Elghanayan family, had been chosen to develop Amazon’s new digs at 46th Road, as well as the adjacent land owned by Plaxall. The developer will now move forward with its redevelopment plans at the 8-acre, triangular site on the north side of Newtown Creek.

Jimmy Kuhn, Jennifer Schwartzman and David Noon of Newmark Knight Frank marketed the site on behalf of the seller.

Only one Brooklyn commercial real estate sale made our top 20 list, and it was a multifamily sale. Harbor Group International paid $117 million in late June to acquire the Crown Heights residential building at 564 St. John’s Place, from sellers Toby Moskovits and Michael Lichtenstein.

The 193-unit building was completed in 2017 and boasts 136,864 square feet of space. Also known as The Frederick, the luxury residential building features upscale amenities, including a rooftop deck with views of Downtown Brooklyn and the Manhattan skyline, onsite parking and a tenant lounge. According to Globe Street, Steve Vegh of Westwood Realty Associates brokered the deal on behalf of both the buyer and the sellers.

The Bronx was quite active when it comes to commercial sales during the year’s second quarter, and has three presences on our list. The biggest CRE deal of Q2 in the borough was the $89 million sale of a mixed-use warehouse at 1601 Bronxdale Avenue. Himmel + Meringoff Properties partnered with Square Mile Capital Management to buy the 356,353-square-foot asset from Sackman Enterprises in May. The 1949-built warehouse is reportedly 100% leased by tenants like New York Sports Club, Con Edison and Parts Authority. The deal was brokered by Fred Stein, Decio Baio and George Margaronis of Pinnacle Realty.

The other two Bronx sales to make the cut in Q2 both involved multifamily buildings. The two-building, 421,833-square-foot community at 2001 Story Avenue sold for $87.9 million to Abraham Fruchthandler and FBE Limited. The free-market buildings in the Castle Hill neighborhood were previously owned by Related Fund Management, the asset management arm of Related Companies. The Story Avenue sale was reportedly the largest single-asset multifamily sale in the Bronx since 2012, when the property at 16 Richman Plaza sold for $137 million. Daniel Parker, Paul Gillen and Ariel Tambor of Hodges Ward Elliott brokered the sale.

The final transaction on our list is the $76.3 million sale of 1131-1133 Ogden Avenue, also known as Highbridge House. Camber Property Group, Belveron Real Estate Partners and the New York City Department of Housing Preservation and Development joined forces to buy the community from Stellar Management. The new owners plan to turn all of the 400 residential units into affordable housing, under rent stabilization for the next 40 years. Aaron Jungreis of Rosewood Realty Group represented both the buyers and the seller in the sale.

If your business or organization wants a convenient location in Midtown Manhattan, an iconic building with a high level of amenities, reach out to us and we will show you worthwhile space situated in the most central location of New York City. To learn about available office space, call Metro Manhattan Office Space at (212) 444-2241.