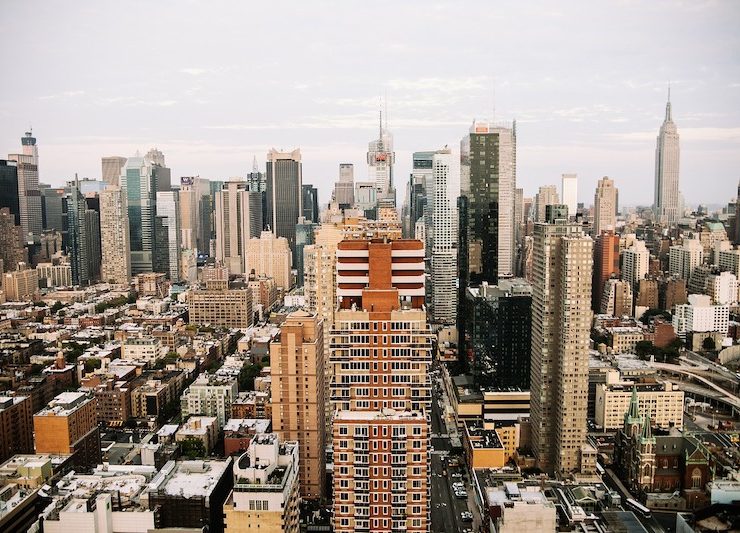 New York City holds the highest rank among the world’s top financial hubs, yet the very first bank and stock exchange in the U.S. was not established here, but in Philadelphia. However, several factors pertaining to geography, economy and politics have helped NYC take the lead not just in the nation, but worldwide, too. Its strategic location favored trade, which in turn lured leading financial institutions, reputed stock exchanges and a dense concentration of public and private banks and trading and insurance companies. The city is also home to Wall Street, the most active stock market in the world, and the New York Stock Exchange, the largest stock exchange by market capitalization.

The city’s population and workforce consist of a mix of various cultures from across the globe, and this is why some of the largest companies and some of the biggest banks and industries, have set up home base here. In fact, it’s difficult to find a name in the world of business that does not have a presence in the city. Regardless of their size, financial service firms have a tendency to cluster in specific areas of the metro they’re housed in. This not only helps them run their operations smoother, since they need access to large pools of specialized labor and support–such as accounting, actuarial, legal–they also need to be in close proximity to the markets. This way, they can develop and innovate intrinsic skills through the sharing of knowledge and practice, and more so, being part of a strong cluster helps them grow faster. New York City has five big areas preferred by the industry, so if you’re just starting your own business in the finance field, this is where you want to set up shop. Read about them below:

Bordered by 59th Street, 48th Street, Third Avenue and Seventh Avenue, the Plaza District houses roughly 87 million square feet of mostly Class A office space. The Park Avenue stretch between 45th and 57th streets is known as the ‘Hedge Fund Alley,’ due to the high concentration of hedge funds operating office space in the area. The General Motors Building, The Chrysler Building, the MetLife Building, the Time-Life Building, the Solow Building or the Trump Tower are all located within the district, grabbing the attention of high-profile tenants that can afford to pay premium office rents.

Among the companies with an office presence in the Plaza District are: Citibank at 800 Third Avenue and 601 Lexington Avenue, Charles Schwab at 300 Park Avenue, Wells Fargo Financial Advisors at 280 Park Avenue, Blackstone at 345 Park Avenue, IBM at 590 Madison Avenue, HSBC at 666 Fifth Avenue, and BNP Paribas at 787 Seventh Avenue. The  latter is also one of the notable tenants at the MetLife Building, which also houses Freddie Mac, Merrill Lynch, BNY Mellon, Citibank and Barclays, among others.

The heart of the world’s banking and financing services, the Financial District, or FiDi, is also the place where the City of New York started taking shape in 1624. Bounded by the West Side Highway, Chambers Street and City Hall Park, the Brooklyn Bridge, the East River and The Battery, the submarket is home to Wall Street, one of the most well-known business streets in the world, and also houses the New York Stock Exchange and the Federal Reserve Bank of New York.

Other financing entities with offices in the Financial District include: JPMorgan Chase at 4 New York Plaza; Hudson Insurance Group at 100 Williams Street; Oppenheimer at 85 Broad Street; SCOR, Western Union and Aflac at One Seaport Plaza; the Federal Savings Bank and Citibank at the Equitable Building; Country-Wide Insurance Co. at the Trump Building at 40 Wall Street; Fried Frank and Morgan Stanley at One New York Plaza, Onechicago, Loeb Partners Corp. and Fidelity Investments at 61 Broadway; Standard & Poors, Liberty Insurance Underwriters and Chubb Insurance at 55 Water Street; American Home Assurance Co., Daiwa Securities, Inc. and The Bank of New York at One Financial Square; Bank of New York Mellon Corporation at One Wall Street; Bank of America at Bankers Trust Company Building; SunTrust Banks, USAIG and AXA at 125 Broad Street; and the Bank of Japan and Sirius America at 140 Broadway.

Located in the heart of Downtown Manhattan and close to the Financial District, this submarket houses New York’s offices of city, state and federal government. The northeastern part of Lower Manhattan’s Financial District has been acknowledged as the Insurance District, as many insurance companies set their headquarters here. Among them are AIG and Equitable, which held the top rank among the world’s largest insurance companies in the early 1900s. Also then, in 1915, Equitable built the largest office building in the world at the time, the iconic 120 Broadway.

Current office tenants in the area include the NYS Insurance Department, the Liquidation Bureau, the Office of State Controller and GAB Business Services at 123 William Street; the NYC Office of the Actuary New York at 255 Greenwich Street; and the New York City Department of Finance at 375 Pearl Street. The district is also the home of the Woolworth Building–the stunning terracotta-and-limestone tower built in 1913 in the Neo-Gothic style, and dubbed ‘The Cathedral of Commerce’ that used to house the headquarters of the Irving National Exchange Bank.

It took more than a decade of intense redevelopment and expansion, but the World Trade Center submarket of Downtown Manhattan features now iconic office towers with consistent inventory of commercial space served by a complex transit hub. Here stands the 1,792-foot tall One World Trade Center, the centerpiece of the rebuilt WTC complex and the tallest building in the Western Hemisphere. Overall, the area features about 24 million square feet of office stock, encompassing about a quarter of Lower Manhattan’s total office inventory.

While some of the buildings are still in lease-up, the highly amenitized settings are attractive to large entities in the financial sector, among them Goldman Sachs, which runs its global headquarters at 200 West Street; they also have a space at One Liberty Plaza, which used to be the headquarters of Merrill Lynch and now houses Wells Fargo, NASDAQ, Empire BlueCross BlueShield, Aon and the New York City Economic Development Corp. Another trophy building in the submarket, highly sought-after by big-ticket tenants in the financial services industry, is 7 World Trade Center. Its tenant roster includes, among others, BMI, Generali, Silverstein Properties, SOM, Moody’s, Capstone Investment Advisors and Global Atlantic Financial Group.

The five-building Brookfield Place office complex in Downtown Manhattan was the largest urban complex developed in Manhattan since Rockefeller Center, and it’s located very close to the WTC area. Some of its notable tenants in the financial services industry include Santander Bank, BNY Mellon, Bank of America, Merrill Lynch, Commerzbank and the Pacific American Corporation.

This large boulevard, stretching between 46th and 59th streets, is one of the most expensive streets in the world, featuring high-quality Midtown Manhattan office space, as well as upscale retail space. Nearly all of the 21 million square feet of office space here is Class A space, and this has turned it into one of the most expensive submarkets in Midtown. Here rise imposant properties like the Seagram Building, the MetLife Tower, the Lever House, while notable tenants include JPMorgan Chase at 270 Park Avenue and 277 Park Avenue, Colgate-Palmolive at 300 Park Avenue, and Mutual of America Life Insurance Company at 320 Park Avenue. The Park Avenue submarket is highly appealing to major corporations, being in close proximity to Grand Central Station or the Waldorf-Astoria, and offering a plethora of restaurant options, as well. However, in recent years, this exclusive enclave has also started to attract smaller businesses in more creative industries, like media and technology.