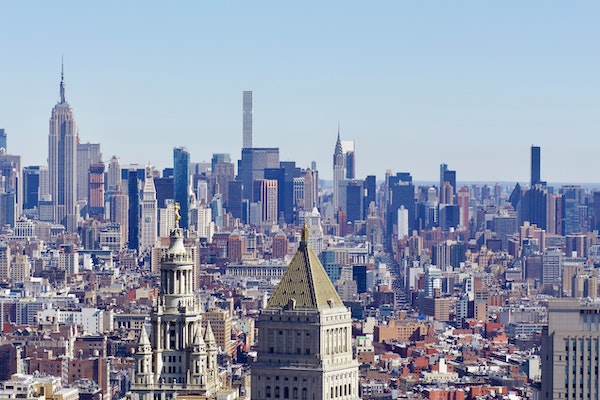 New York City commercial real estate is a lucrative business and a sought-after investment destination for companies across the globe. Owning trophy commercial assets in the city is a long-term, highly profitable investment. So it’s no wonder that competition in this industry is fierce. Several big names have managed to add iconic and innovative properties to their portfolios, and they continue to be active. To get an idea of who owns the Manhattan commercial real estate market, we’ve compiled a round-up of the biggest commercial landlords in the city. Find out highlights about these companies below, in no particular order.

Founded in Maryland in 1982 and converted into a REIT in 1993, Vornado Realty Trust is one of NYC’s top commercial real estate owners. The company owns and manages 33 buildings totaling 20.6 million square feet of Manhattan office space and 65 properties comprising 2.7 million square feet of retail space. Vornado’s portfolio includes 1290 Avenue of the Americas, Hotel Pennsylvania, One Park Avenue, 666 Fifth Avenue, One and Two Penn Plaza, and the luxury residential tower at 220 Central Park South. Vornado also holds a 70% interest in 555 California Street in San Francisco and the 3.7-million-square-foot Mart in Chicago.

The Related Companies is one of Manhattan’s top commercial and residential landlords. The company developed the massive Hudson Yards project alongside Oxford Properties and currently manages 20, 30, 50, and 55 Hudson Yards. Related is also the developer of Time Warner Center, now known as the Deutsche Bank Center, the Paragon Building, the Blanchard Building, and 300 Lafayette Street. The company was created back in 1972 and is reportedly the top residential landlord in New York City.

Tishman Speyer was established in 1978 by Robert Tishman and Jerry Speyer. The firm is known for developing Rockefeller Center in Midtown Manhattan. Tishman owns the MetLife Building at 200 Park Avenue, the Hearst Tower, 300 Park Avenue, 175 Varick Street, and the CitySpire Center at 150-156 West 56th Street, among others. It developed the new Yankee Stadium in the Bronx and is currently developing Bjarke Ingels’ The Spiral at Hudson Yards. The company is also spearheading some of the most significant new developments in Long Island City. Namely The JACX and Jackson Park. Fun fact: Tishman was the previous owner of the iconic Chrysler Building until it sold it in 2019 for just $150 million.

The Durst Organization was founded in 1915 and is the oldest family-run real estate company in NYC. It currently owns and manages more than 13 million square feet of Class A retail and office space in Manhattan and 3 million square feet of rental properties. Presently run by Douglas Durst, the company helped develop Midtown East as an essential business district. The Durst Organization was responsible for developing skyscrapers such as 825, 675, 733, and 655 Third Avenue. Durst also developed the first green skyscraper in the U.S., Four Times Square, and spearheaded the construction of One Bryant Park. The Durst Organization also co-developed One World Trade Center alongside the Port Authority of New York and New Jersey.

Boston Properties was established in 1970 and is headquartered in Boston. The company is a significant player in the New York City commercial real estate scene and owns several iconic properties. Boston Properties’ portfolio in NYC includes 510 Madison Avenue, 599 Lexington Avenue, the Times Square Tower, 399 Park Avenue, 250 West 55th Street, and 601 Lexington, among others. In total, the company owns and manages 26 properties in NYC, comprising 11.8 million square feet. In 2008, Boston Properties shelled out $2.8 billion to acquire the General Motors Building – the highest price ever paid for a U.S. office building at the time.

One of the largest real estate investment companies in NYC, Silverstein Properties, was created in 1957. Over the years, the company developed, owned, and managed more than 40 million square feet of office, hotel, retail and residential properties. Its portfolio includes iconic projects such as the Americas Tower, 30 Park Place aka the Fours Seasons Private Residences New York Downtown, 120 Wall Street, the Salmon Tower, the Beekman Tower, the Equitable Building, 711, 529, 521, and 530 Fifth Avenue, and 1177 Avenue of the Americas. Silverstein also developed 2, 3, 4, and 7 World Trade Center in Lower Manhattan.

A relatively new name on the NYC commercial real estate scene, RXR Realty was founded in 2007. RXR quickly grew to become one of the most prominent investors in the city. The company’s portfolio currently includes the iconic Starrett-Lehigh Building, 32 Old Slip, 75 Rockefeller Plaza, 61 Broadway, the Helmsley Building, 5 Times Square, and 450 Lexington Avenue. RXR is currently developing 300,000 square feet of office space at Pier 57 in West Side Manhattan. Overall, it manages 26.5 million square feet of NYC properties. RXR is also a top player on the residential scene, operating 7,100 multifamily units in the city.

Brookfield Properties is one of the biggest names in American commercial real estate investment and development. Founded in Canada in 1923, the company operates real estate projects on behalf of Brookfield Asset Management. It currently manages over 675 properties and over 320 million square feet globally. Brookfield’s portfolio in NYC includes 1100 Avenue of the Americas, 200 Lafayette Street, 300 Madison Avenue, 333 West 34th Street, 200 Liberty Street, 245 Park Avenue, and Brookfield Place. It also owns the famous Zuccotti Park in the Financial District. The company is developing 1 Manhattan West and 5 Manhattan West on Manhattan’s West Side and has already signed tenants like the NHL, Skadden, Arps, Slate, Meagher & Flom, and Ernst & Young.

Are you thinking of relocating your business to a convenient Manhattan location? Are you looking to lease space in a modern building offering state-of-the-art amenities? Then reach out to us and we will show you worthwhile space in the heart of New York City. To learn about available office space, call Metro Manhattan Office Space at (212) 444-2241 or email us at info@metro-manhattan.com.